Big Ben back at practice

Home/News/Big Ben back at practice
Previous Next

Big Ben back at practice

“He was firing it left and right. It’s just great having him back.” — Hines Ward on Ben’s return to practice today.

From The Huddle at USA Today this afternoon: 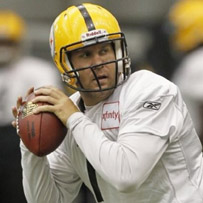 In his first post-suspension practice with the Pittsburgh Steelers, Ben Roethlisberger’s first pass Tuesday in 11-on-11 drills was a deep completion to speedy wide receiver Mike Wallace.

“It was good. I just wanted to get one up there early for Mike, and he made a good catch,” said Roethlisberger.

The rainy-day workout was held in the team’s indoor practice facility.

“Hopefully, that means we’re going to get a lot of that come two Sundays from now,” said Wallace.

You can see a few photos from the practice here.

“His conditioning is not a concern at all and if you lay eyes on him you’ll understand what I’m talking about. He’s in great physical shape.  His arm is in great shape. He’s ready for work…it’s just about being sharp – being football sharp, being able to recognize and identify pressure packages and change protection points and distribute the ball.  And that’s football.   That’s why we’re working today.  But ultimately you’ve got to be able to do that under duress and sometimes the only duress that is legitimate is inside stadiums so we understand that his progress is going to be measured on how he does in the stadium next Sunday and moving forward.” — Coach Tomlin on Ben, during his radio interview on The Sirius Blitz today on Sirius NFL Radio.

*Thank you to Stan for the heads-up!