Home/News/Working with Mr. Whitfield…
Previous Next

Ben spent much of September working with quarterbacks coach George Whitfield.  Mr. Whitfield owns Whitfield Athletix in La Jolla, California and commuted each week to Pittsburgh from his home in San Diego to try and simulate a regular NFL practice week with Ben at a local high school. 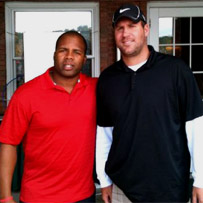 Mr. Whitfield sent photos from their workout sessions which I have added to the gallery!

Their first day together was spent working out in a heavy rain, “I don’t know how many guys like to throw in the rain, but he did it in a steady, driving rain for two hours,” Mr. Whitfield told the Pittsburgh Tribune- Review‘s Scott Brown. “To him, it was much more than just going through drills. He wanted to know: ‘What did you notice here? What do you have in mind for this drill?’ I learned how dedicated this guy is.”

Mr. Whitfield also appeared as a guest yesterday on 93.7 – The Fan and said of his student, “I’ve been looking forward to talking to the Steel City about their leader. In regard to Ben being ready… He’s ready. He’s been through a one-man training camp. It was meticulous, it was filmed, it was Western PA blue collar style. He’s ready, he’s sharp, the guy’s in great shape and more than anything he’s excited. So you blend all that together and I think when they uncage him in 13 days, he’s gonna be ready to go. I think you guys will be excited.”


You can listen to Mr. Whitfield’s full interview here (Thank you Jan!).

And you can check out the workout photos here.


*Thank you so much to Mr. Whitfield!