‘Big Ben’ carves his own path in Steelers history

‘Big Ben’ carves his own path in Steelers history

From Dave Hannaman at The (Findlay) Courier: 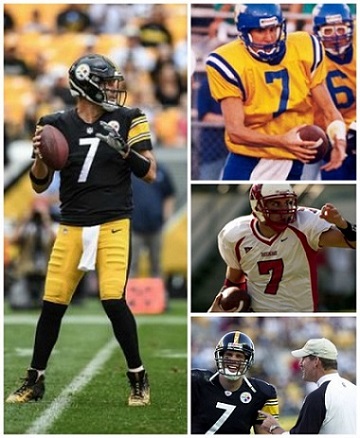 By the time Ben Roethlisberger joined the Pittsburgh Steelers in 2004, men with Hall of Fame names like Bradshaw and Harris and Swann and Lambert and “Mean Joe” had carved out an impressive history for the organization.

As the new kid out of Findlay High School and the Mid-American Conference, Roethlisberger was determined to not only add to the legacy, but put his own stamp on it as well.

“When I got to Pittsburgh, it was Terry Bradshaw. Everybody said, ‘This is what you have to live up to,’” Roethlisberger said.

“I said, ‘No, I don’t need to be Terry Bradshaw. I need to be the best Ben Roethlisberger I can be.’

“Terry Bradshaw was a great quarterback and had a great career. But the message I always wanted to make was, ‘Don’t try to fill someone else’s shoes; believe in yourself and make your own path.’”

Fourteen years later, Roethlisberger’s size 13 cleats have churned out a Hall of Fame-caliber career highlighted by two Super Bowl championships (2006, 2009) in three Super Bowl appearances. His 148 career wins are the seventh-most of any quarterback in NFL history and his .676 winning percentage (148-71) is fourth-highest of any NFL quarterback with at least 100 career wins.

Not bad for a guy who was the starting quarterback just one year in high school, and in college didn’t attend an FBS power school that played in front of a national prime-time audience every Saturday.

Truth be told, Roethlisberger credits that small-market, Midwest background for much of his success.

“It’s the work ethic. It’s blue collar. It’s what this area is all about. That’s why Pittsburgh worked so well for me. It has that same kind of work ethic,” Roethlisberger said in June during a celebrity softball game he set up in Findlay to raise funds to benefit Findlay High athletics and the Ben Roethlisberger Foundation. Over the years the foundation has contributed around $2 million to the Make-A-Wish Foundation, as well as K-9 and service dog units for police and fire departments throughout the U.S.

“What are you going to do on days when you don’t feel like doing it?

“That’s what a great work ethic will do for you. You can always find a way if you believe in yourself. If you believe in what you want to do, if you set your goals as high as you can, I mean, reach for the stars and see how far you can go.”


You can read the full story/interview here.

Did you miss the 2018 Premiere of The Ben Roethlisberger Show this morning on 93.7 The Fan?

No problem, you can read the recap and listen to audio of it right here.