Home/News/Big Ben has the edge
Previous Next

From an article today by Joe Platania, Comcast SportsNet – Baltimore:

It’s no secret that when Ravens fans look towards this year’s Week One home game against the Pittsburgh Steelers, they will hope and pray their purple-clad heroes get the best of every visiting player.

But none more so than quarterback Ben Roethlisberger.

The strong-armed, playmaking signal-caller is perhaps the single biggest reason the Steelers have five AFC North Division crowns to the Ravens’ two and three head-to-head postseason wins to Baltimore’s zero.

The Ravens haven’t beaten a Roethlisberger-led Steeler team since Dec. 24, 2006, when Steve McNair carved up an injury-riddled Pittsburgh defense in a 31-7 win at Heinz Field over the defending Super Bowl champions….

From Ray Fittipaldo, in the Pittsburgh Post-Gazette: 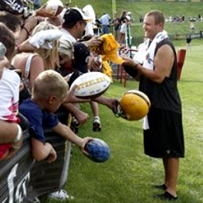 For years, fans have descended upon Saint Vincent College in Latrobe to watch Steelers training camp. It has become an annual event for people who enjoy watching practices and standing in line for autographs.

The Steelers’ plans for training camp have not changed, but other NFL teams have canceled their off-site training camps because of the uncertainty created by the lockout.

Saint Vincent spokesman Don Orlando said Monday that the college is “optimistic” that the Steelers will hold training camp there despite the uncertainty of the lockout.

“We’ll be ready if they need us,” Orlando said.

We have added a few more “Lil’ Fans” to the gallery today! You can check ’em out here!


And, the Steelers Mexico Fan Club pays tribute to their favorite quarterback. You have to see this photo!