Home/News/Big Ben is ready
Previous Next

“I’m excited, but really I am a little nervous, a little anxious just because so many expectations, the guys and fans and media. To me it’s more about the locker room, the guys.” — Ben

From Mike Prisuta at Steelers.com: 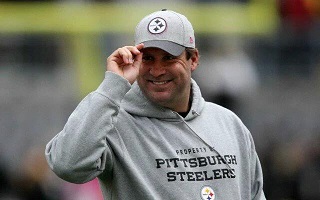 “Yeah, I think so,” Roethlisberger confirmed after practice today.

Roethlisberger has been out since suffering a sprained MCL/bone bruise in his left knee on Sept. 27 at St. Louis.

He’s convinced he’s ready to return because of “the way it felt all week, not really having any setbacks, no pain.

“Felt pretty good,” Roethlisberger continued. “Obviously, you can’t simulate a pass rush, getting hit, sacked, things like that. But I have faith in my line that they’ll keep me clean, anyway.”

Roethlisberger’s fourth start this season and the 162nd regular-season start of his 12-year career promises to be an emotional one.

“Nervous,” Roethlisberger said, “got a lot of expectations.

“I know there’s a lot of expectation from them. I want to be great for them. I want to help us win the game, and (Cincinnati) is a great football team. It’s not going to be easy, so a little extra nerves.”

Roethlisberger will also have to overcome not having played in over a month.

“It’s no different to me than trying to play the first game of the year after playing preseason,” he said. “You know it’s different, you have to kind of feel it out and get going. I don’t know too many times first games of the year you’re just clickin’ and hittin’ it and all that stuff.

“There are a lot of little things like that involved. There will be rust. There will be nerves. It’s just about trusting in the guys around me that they’ll play for me if I’m not playing great.”


Stop by Steelers.com for all the latest.