Home/News/Big Ben on 93.7 The Fan
Previous Next

“I could get five, six or seven more years out of these arms and legs. This is home for me and where I want to finish. I bleed Black and Gold.” — Ben, from his radio interview.

Ben was a call-in guest today on The Cook and Poni Show: 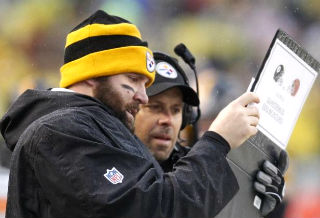 On the NFL Draft this week –

“You know what, I can’t wait for this to be finally over with! I mean, this has been dragged out! I’ve seen ‘Mock Draft 13.5’…it’s just going on and on and on! I’ll be excited so we can finally get this thing over with and to finally figure out who our new teammates are going to be and move on!

“Whatever the high powers decide can help this team is what I am going for. Anything to help the team, 8-8 is not good enough. We have to get back to winning Super Bowls.”

“I talked to Blake, and I know Blake has that fiery chip. I think he’s going to be the best one of the group because I see something in him, his competiveness, his leadership. And I think he’s got a lot of upside.

“If you’re a guy that comes out of a smaller school I think you should have a chip on your shoulder. It helps motivate you.”

“We’ve seen some of the scrambling, jumping, throwing, flipping type things he can do and it makes your jaw drop because it’s special stuff. Does that translate to the NFL? I don’t know?

“He has so much upside, but we will have to see. He’ll come into this league and he’ll probably be a star early because he’ll use his athleticism, but it’s not about the first year. It’s about the second, third and fourth years.

“I was in the weight room the other day with Joey Porter asking me what I thought about Manziel. I looked at Joey and said, `Joey, do you think if you got a good hit on him, that he would be OK? And he said, `No, not at all.’ And that’s my question?

“You have guys like Joey Porter, who’s a big guy, guys that are fast like Troy, Ike Taylor coming off the edge, Lawrence Timmons – you’d better be real athletic, get down or be big to absorb the pounding an NFL quarterback can take. The key I’ll say every year when I get asked about RGIII, Andrew Luck, or whoever it is…Cam Newton, it’s not about your first year, it’s about years two, three and four.”


On losing Jerricho Cotchery to the Carolina Panthers this off-season –

“He was one of the best teammates, along with Heath Miller, I’ve ever played with in any sport! I didn’t see us losing him, so it might have made it a little tougher when you’re not expecting someone to go. But he had to do what was right and best for his family.”

“Always a chance. I don’t know how realistic it is because they have so many other needs. I don’t know that there are any real serious talks. If there is, I haven’t been informed of it. I think it’s probably just been some small talk, like, `Let’s talk later.’ It’s hard for me to really speculate what they’re doing behind closed doors. It’s nothing significant enough to be brought to my attention.”

“I had a baby girl, and have a son and a family to hang out with! That’s pretty cool! I’ve just been working out six days a week, training, still sneak in some golf every once in a while, and some huntin’ and fishin’, so I get some time to myself. just enjoying being a dad because it goes so fast.”


On whether his baby girl, Baylee, has him wrapped around her little finger yet –

“She sure does! (laughs) She is a handful already!”


You can listen to Ben’s full interview here (bottom of the page).