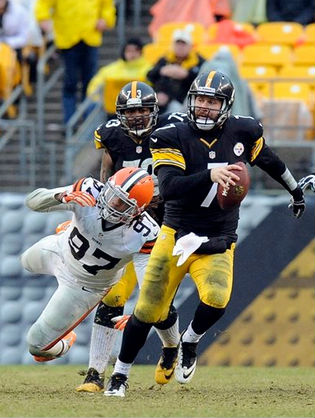 Ten years ago, hardly anyone knew that the Browns almost drafted Ben Roethlisberger – and that the team’s flirtation included a private workout on the Miami (Ohio) campus with Roethlisberger in the days leading up to the 2004 NFL Draft.

In the days leading up to that draft — no one seems to remember if it was five or 10 days before, but it was in that range — the Browns loaded up then-owner Randy Lerner’s private plane for a late look at quarterbacks. This was in April, 2004, eight months before Butch Davis would step down as Browns head coach and a month after the team had signed veteran quarterback Jeff Garcia.

By 2004, Pete Garcia’s title with the Browns was vice president, player personnel and football development.

The Browns didn’t have a general manager by title — Davis held the last call on football decisions, which in that draft ended up being a trade up of one spot to select tight end Kellen Winslow, who’d been recruited by Davis and Garcia at the University of Miami.

“We loved Ben,” Garcia said. “I had been to see him play a couple times during the (prior) season. We thought long and hard about picking him.

Also on the flight were offensive coordinator Terry Robiskie and quarterbacks coach Steve Hagen, both of whom had been on Davis’s staff but moved to new roles for 2004, and then-Browns receivers Andre King and Frisman Jackson, who’d been called by Garcia the previous day to participate in the Roethlisberger workout.

Said King: “…We were at the airport at 8 a.m., up in the air probably 45 minutes and then we were on the field.

(Roethlisberger) was a big, strong guy. We met him, we stretched, and we just started running routes.”

By all accounts, Roethlisberger impressed.

“Five minutes in,” Jackson said, “it was obvious Ben could throw the hell out of the football.”