Big Ben on being a dad, being 30, and being in his football prime

Home/News/Big Ben on being a dad, being 30, and being in his football prime
Previous Next

Big Ben on being a dad, being 30, and being in his football prime 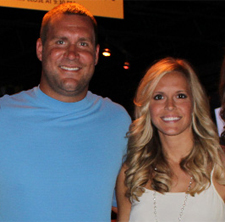 Steelers fans know by now their quarterback will become a father this year. What he did not divulge, and still has not, is when his baby boy is due. The delivery is expected sometime this fall, perhaps even on the first Sunday of December when the Steelers visit Baltimore.

“We’ll do everything we can to make sure it doesn’t happen,” Roethlisberger said of trying to avoid a game-day birth.

But if that’s not enough? Oh, well, Byron Leftwich and Charlie Batch will just have to take care of business that day. This is not your 2010 Big Ben. He’s 30. He’s married. He has a college degree. He’ll be a dad. He’s different.

“When you’re going to be a father, all you think about is having this little baby, you don’t think about the registry, the room, the diapers, all the little things that go along with it. It’s exciting and it is a little bit scary, too. It is. Before long, you’re going to have this little life that you’re taking care of. But I’ve heard nothing but great things from people [about] just how it will change your life. I’m just so excited for that challenge.”

“Yes and no. I look at it as, OK, this is my ninth year, which is a blessing in itself for a football player, especially a quarterback. How much longer will I play? I don’t know, no one knows that except the man upstairs.”

It is Ben Roethlisberger’s ninth season. Ninth? It was just yesterday he was the youngest quarterback to win a Super Bowl.


You can read the rest of his interview here.