“I’m just going to play the game the way I know how to play it. I’m not going to change anything.” — Ben, on whether he has “tweaked” his game.

More from Ben this afternoon: 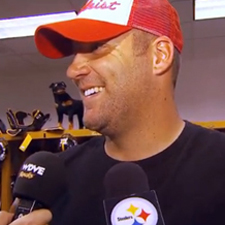 “I enjoy watching a guy like that who is a future Hall of Famer and one of the best to play the game, you can learn things. You just have to be in awe of the guy that he is.”


On the growth he’s seen in Antonio Brown’s game –


When asked to give the “hierarchy” of his receivers, Ben joked –

“It would be a lot of fun to do all that stuff all the time. But I think we’ve been pretty successful with what we’ve done and I’m not complaining about the offense that we have or what we’ve done in the past.”