Big Ben on the bye week

Home/News/Big Ben on the bye week
Previous Next

Big Ben on the bye week

“Looking back at the film, we have done some good things offensively-speaking and we’ve gotten better every week. We just have to continue to improve and not take any steps back. We feel like we’re close.”

Ben’s weekly interview with the media took place on Tuesday before practice because of the team’s bye week. 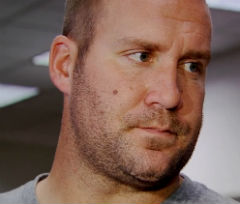 On whether he takes back his post-game comments on Sunday evening about being the “worst team”:

I was talking record-wise. If you look record-wise, we are one of them. That’s coming at a time when you don’t know what happened in the rest of the games of the week. I still don’t know how many teams are winless but if you look at records, which I am always a big believer in wins and losses, not numbers, then I would say we are, record-wise, one of the worst teams in the NFL. I don’t think it’s a far stretch.


On whether he takes the losses personally, “Does it hurt more?”

I take pride in winning football games more than any numbers. That’s what I’ve based my career on so far, wins and losses, so it definitely stings. Coach Hoeppner always said that the quarterback takes too much credit in a win, and too much blame in a loss. It’s painful to lose games, because I’ll put it on myself.


On the injury to his right forefinger, a subluxation or partial dislocation – which occurred Sunday when he followed through on a pass and struck Minnesota Vikings linebacker Chad Greenway:

It’s fine. I told coach today I’d practice today if he’d let me. I don’t know if he’ll let me but I’d go because I want to be out there.


On the non-call (horse-collar) and taking sacks:

What happened on that particular play, I got up. That’s the hard part. Everyone talks about don’t take a sack. Well, when a guy grabs you from behind, you don’t know a sack is coming. It’s not like there was much I could do. He grabbed me and got me down. I got up and looked at the referee, and I kind of motioned for a horse-collar. He told me I was in the pocket and there is no horse-collar. He is correct. That’s been brought up to me in the past, because it has happened to me before. He was correct. Yes, the guy grabbed me by the collar, and outside the pocket it would have been a flag. In the pocket, the rule is correct.


What makes you confident that you’ll turn this around (with both veterans and new players)?

The people we have in here…that they’ve been here, they’re good players and we trust in each other. Give it everything we got. Get some rest coming up and get our bodies healthy for a 12-game streatch and let’s give it all we’ve got.


On whether the confidence level hasn’t changed:

Not if you asked me. Obviously we’re down, we’re disappointed, it hurts, but I don’t think confidence is low.


How do feel physically?


Advice to Pirates going through their first game in the playoffs?

Just win. Find whatever it takes to win. In baseball it’s obviously different but just find a way to win.


On whether he saw the running game coming together against the Vikings:

I think [Le’Veon Bell] showed glimpses at times of what he can do. I’m excited, I’m happy for him, and I told him on the plane on the way home that I thought he did a good job, and just keep going because he showed some really good things.


You can watch & listen to Ben’s interview here.