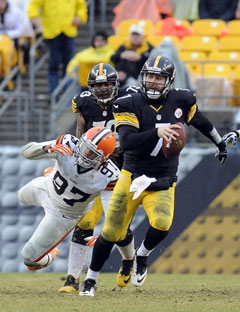 Re: Being disappointed about his play after the game:

Yeah I was. There were three, four or five plays I’d like to have back but you could probably say that about any game. Some of them are going to be plays that you guys don’t even know about. Obviously the fumble but just a couple things here and there that I’d like to have back.


Do you feel at home at Cleveland?

Well it’s a very hostile environment and I anticipate, and I’m sure a lot of guys around here or people that have been here for a while, this is as big of a game probably in Cleveland in a while. Just because of their record, our record, us coming in there, AFC North (and) the rivalry that’s there. I anticipate it being a hostile environment, maybe like nothing I’ve ever seen up there before.


Do you get up more to play the Browns?

Heck yeah. Well I’m a competitor. It’s a division rival. It’s my home state. Yeah I always get up a little bit more.


Re: Red zone scoring issues and if they need to run the ball more frequently in that area of the field:

No, we need to just execute. We were 1-of-4 last week. I think the week before we were a lot better. We’re going to take what the defense gives us. Last week it was throwing the ball. We just need to execute better.


Is the pass heavy play-calling in the red zone a by-product of operating out of the no-huddle?

Some of it is but that’s me calling plays (and) feeling like we had the advantage in the pass game down there. So I called passes and I don’t regret any of it.


Re: Having lots of big plays in the first half against Cleveland and if that was a mind-set approach or what the Browns did:

A little bit of both. You never really expect a screen, I think we had two screens early, to go real big. You expect to get first downs and things like that. But for them to go as big as they did I think it’s just a by-product of what they gave us.


Does it feel like more of a rivalry based on how things are going this year?

I don’t know in the last the couple of years if we ever played them this early (in) both games. Especially play there this early, it’s been a long time since that’s happened to my knowledge. Usually early in the season teams are still trying to figure each other out (and) figure (themselves) out. Both teams have OK records for where we are right now so I think that all those factors make this a little bigger rival than it’s been in maybe the last year or two.


You can read his entire interview and watch the video here.