Today, Ben announced the fourth and fifth grant of the 2014-15 season from The Ben Roethlisberger Foundation at The Giving Back Fund.

The Foundation will be distributing grants to the Cleveland Metroparks Ranger Department and the Cuyahoga Metropolitan Housing Authority Police Department within proximity of where the Steelers will play the Browns on Sunday, October 12th.


“This grant will significantly contribute to our efforts to provide good law enforcement services to our residents, partners and stakeholders throughout Cuyahoga County.” — Jeffery K. Patterson, CMHA CEO and Safety Director.

The Cleveland Metroparks Rangers plan to use their grant toward safety equipment for their K-9 unit, while the Cuyahoga Metropolitan Housing Authority (CMHA) will apply the grant funds to the purchase and training of a new dog. 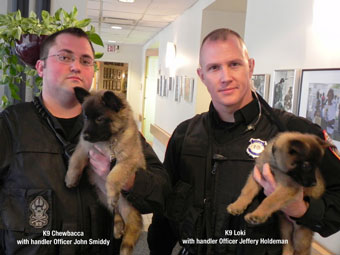 Cuyahoga Metropolitan Housing Authority’s Chief of Police Andrés González said, “We are thrilled to receive this grant. It will enhance our operations and improve our delivery of services.”


Check out Ben’s foundation page for more info, and feel free to contact Stephanie Sandler at The Giving Back Fund with any questions about donating or submitting grants for your department!


Photo: That’s Officer Smiddy and his furry partner, Chewbacca & Officer Holdeman with his equally furry partner, Loki, from an earlier grant in 2011. The puppies were donated by a breeder, and funds from the grant provided by Ben’s Foundation that season paid for their training and supplies.