“He was always the very first guy I talked to when I came off the field. I’d ask him, ‘What did you see?’ I valued his opinion more than any other player or coach. And that’s no disrespect to anyone else. It’s just what I thought of Charlie. He never tried to impose himself on me. But he was always there when I needed him.” — Ben, from his interview yesterday with Mr. Cook.

From an interview with Ron Cook, Pittsburgh Post-Gazette: 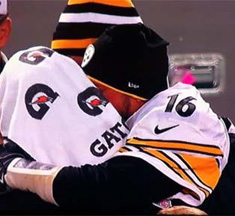 Ben Roethlisberger isn’t quite sure what to expect when the team gathers later this spring for offseason workouts. Batch was with him in the quarterbacks meeting room every day since Roethlisberger joined the Steelers as a No. 1 draft choice in 2004.

“It’s definitely not going to be the same,” Roethlisberger said. “Charlie and I always sat next to each other. I’m going to miss the laughs and the talks that we had. I owe so much to him.”

Roethlisberger was quick to interrupt his round of golf Sunday in Georgia and jump on the telephone to pay tribute to Batch, who became expendable when the Steelers selected Oklahoma quarterback Landry Jones Saturday in the fourth round of the NFL draft. Veteran Bruce Gradkowski, who was signed as a free agent in March, will be the team’s other quarterback.

“I feel like I could go on for hours about Charlie,” Roethlisberger said. “He meant so much to me. I told him numerous times, ‘You made me what I am today.’ From on the field to off the field, as a quarterback and as a man. He truly is one of the best guys I’ve ever been around.”


“Don’t throw away the old bucket until you know whether the new one holds water, Swedish proverb.” — Charlie Batch via Twitter (@CharlieBatch16), April 28th.

One of the most poignant moments in an otherwise disappointing 8-8 season in 2012 was an injured Roethlisberger hugging Batch on the sideline Dec. 2 in Baltimore after Batch led the Steelers to an unlikely 23-20 win against the team that would go on to win Super Bowl XLVII. Both had tears in their eyes. You could see their bond. You could feel the emotion between them.

“He just thanked me for all my support and I thanked him for all his support,” Batch said. “We both knew he was coming back the next week. At that moment, I think we both realized that game could possibly be it for me in the NFL.”

You can also read Joe Starkey’s column on Charlie Batch at the Pittsburgh Tribune-Review here.