…is Big Ben’s appearance at the King of Prussia Mall in Philadelphia! 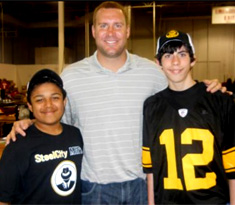 The public autograph signing will take place at the Sports Vault store, at their location in the Plaza of the King of Prussia Mall on May 4th, 2013, from 1:00 PM to 2:30 PM.

The Sports Vault is across from the Food Court in the Sears wing.

There are only seven Photo Op tickets left!

This is Ben’s first autograph signing in PA in over 7 years! Don’t miss out!


You can get more information on pricing and purchase your tickets in advance here.


You can get travel info to the King of Prussia Mall here.


FANS: If you are going to the event this weekend and would like to share your experience and any photos with us, please email us at BigBen7website@gmail.com! We’ll post them on the site!


*The photo above is from Ben’s last signing event, which took place in Virginia in April, 2012.


Thank you to both Pat and Anthony at the Sports Vault! It’s been great working with you guys!


From an article featured in USA Today, post-game: 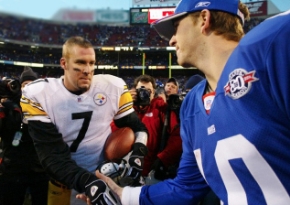 Ben Roethlisberger was not about to be upstaged by Eli Manning.

In a surprise shootout between two rookie quarterbacks, Roethlisberger outdueled Manning as the Pittsburgh Steelers won their franchise-record 12th straight game, a wild 33-30 triumph over the New York Giants.

The last two teams to win 12 straight games in the same season won the Super Bowl. New England accomplished the feat last season and Denver did it in 1998.

“I don’t ever want to remember what it is like to lose,” said Roethlisberger, who has won his last 25 starts dating to his days at Miami of Ohio. “We didn’t play our best game of the season, but we found a way to win.”

While Manning gained all the attention when he was selected first overall in April’s draft, Roethlisberger slid all the way to the Steelers (13-1) at No. 11.

Roethlisberger already has marched into the NFL record book for consecutive wins by a rookie. He has enjoyed a storybook season, leading the Steelers to the AFC North Division title while improving to 12-0 since taking over for the injured Tommy Maddox.

“I know he’s been making some good decisions with the game on the line,” Steelers coach Bill Cowher said of his quarterback. “He’s the leader of our football team.”


You can read the rest of this 2004 article (scroll past the game stats) here.


*Note: NFL Network is notorious for pre-empting scheduled programming. This re-air of the 2004 game could change without notice.