Ben was not on the radio for his weekly show today, but Tom Brady was for his, and had this to say about #7: 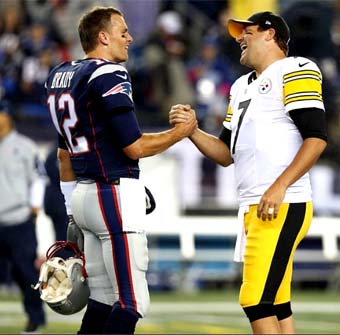 “He’s one of the toughest guys in the league. I would never rule him out for anything,” Brady said Monday morning during his weekly interview on sports radio WEEI’s “Kirk and Callahan Show.”

“He’s done that before and played and thrown for 400 yards. He’s just a stud, just an incredible player,” Brady added. “I’ve played against him since 2004, and nothing surprises me with him. He’s one of the best quarterbacks I’ve ever played against. I would never count him out.”

Brady added that he’s seldom spent time with Ben, but they have mutual friends.

“He’s such a great player. He’s been the leader of that team for a long time and done a great job at it. They always seem like they’re right in the mix,” Brady said on WEEI. “He displays toughness and has a very unique style of play; it’s pretty spectacular to watch the way he’s able to shrug off defenders and make plays and throw the ball down the field. He’s having such a great season this year. So we’ll see. Who knows how bad it is and if he’ll have a chance to play? It’s only Monday, and like I said, he’s as tough as anybody.”


*Recap from Mike Reiss at ESPN.com.