From his interview with his co-radio host, Ron Cook: 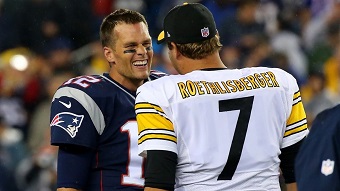 The toughest part for Ben Roethlisberger after surgery to repair a torn meniscus in his left knee?

“It’s going to kill me not to be able to go against [Tom Brady] Sunday. I’ve said many times I think he’s one of the best quarterbacks of all time and the best one going right now. You know me. I love to battle the best.”

Roethlisberger, who had outpatient surgery Monday morning after he was injured midway through the second quarter of the Steelers’ 30-15 loss to the Miami Dolphins Sunday, plans on missing just the New England game at Heinz Field.

He hopes to be back after the team’s bye Oct. 30 to play in Baltimore Nov. 6 against the Ravens. But he knows that might be impractical because he’s 34 and because of his medical history.

“Doc says my knee looked good, but there still was some stuff in there from when I had my bone bruise last season in St. Louis,” Roethlisberger said Tuesday from his North Hills home. “He said that might keep me out a little longer than just a simple meniscus tear. Maybe an extra week or so. But there’s no way to put an exact timetable on it. It all depends on my pain and how I feel.”

Roethlisberger said his rehabilitation began as soon as he returned home Monday afternoon. “I’m icing and elevating as we speak.”

Roethlisberger said Steelers team orthopedic surgeon Dr. Jim Bradley and coach Mike Tomlin told him to do the first week to 10 days of his rehab at home. “But that’s going to be hard for me. I have to go in this week to see the guys. I’ll call Landry [Jones] and check in with him. I want to do everything I can to help him. I just hope coach lets me be on the sideline Sunday.”

Jones will get the start against the Patriots. He played well at times last season when he filled in for an injured Roethlisberger, especially in a home win against Arizona. But he also played so poorly late in the playoff win in Cincinnati in January after Roethlisberger left with a shoulder injury that Tomlin put Roethlisberger back in even though Roethlisberger had a hard time throwing the football 10 yards. 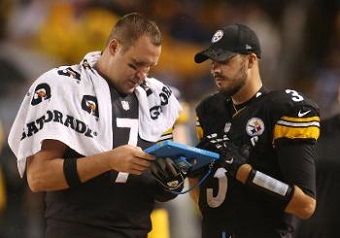 “I have faith in Landry,” Roethlisberger said. “He knows the playbook. Nothing is going to surprise him. I just wish all of our other guys were healthy. That would help him a lot.”

In addition to Roethlisberger, Cam Heyward will miss the New England game. Marcus Gilbert and Ryan Shazier are questionable. But Roethlisberger’s absence will have the greatest impact on the Steelers’ chances of winning. Nobody knows that better than the great Brady.

“He’s one of the toughest guys in the league,” he said this week of Roethlisberger on his radio show on WEEI in Boston. “He’s just a stud, just an incredible player. He’s one of the best quarterbacks I’ve ever played against.”

Roethlisberger said he was “humbled” by Brady’s comments.

“He knows the respect I have for him. For him to respect me like that, it’s awesome. Very cool.”

Roethlisberger wasn’t nearly as thrilled when told CBS analyst and former NFL linebacker Bart Scott called him a “drama king” at halftime of the Miami game. Scott insinuated that Roethlisberger embellished his injuries, including this latest knee injury.

“What did I do to deserve that? All I’ve ever done is keep playing and keep my mouth shut,” Roethlisberger said. “You just have to shrug that stuff off. But I would tell him to go see John [Norwig] our trainer and check out my medical file. It’s pretty thick. You can’t make that stuff up.”

Coincidentally, Roethlisberger always has said the hit he took from Scott in Baltimore in 2006 was the hardest hit of his career. “I heard him make this ‘ungh’ sound, like air rushing out of his body,” Scott said that day. “But I came back into the game,” Roethlisberger said Tuesday, satisfaction in his voice.

Roethlisberger also went back into the Miami game Sunday and played the second half. He said he had no regrets.

“Doc told me at halftime he was pretty sure I had a meniscus tear and that I probably was going to have surgery on Monday. He said it was up to me and my pain and that I wasn’t going to do any more damage to my knee.

“I went back in because I thought it still gave us a chance to win. Obviously, I wasn’t able to move as well, but my adrenaline was so high. I don’t think it really affected any of my throws. I just wish I had played better. It would have been a great story to come back and win.” 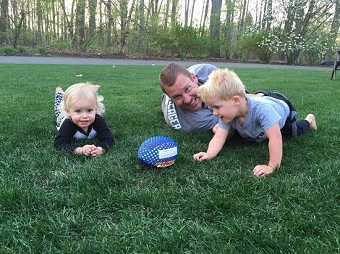 Roethlisberger has been fortunate to avoid a major injury despite taking a beating for 12-plus NFL seasons. The surgery Monday was the first on his left knee. He has had two meniscus operations on his right knee. He had facial surgery after his motorcycle accident in June 2006 and an emergency appendectomy in September 2006. He left the Seattle game last November with concussion-like symptoms, saying, “You can get new body parts, but you can’t get a new brain.”

“I do and I don’t,” Roethlisberger said when asked about having concerns for his long-term health. “I do because I have little ones at home. Ten or 20 years from now, I want to be able to play with them. But, at the same time, I don’t worry about it because of the advancement in medicine. Even if I have to have a knee replacement when I’m 50, they’ll probably be doing outpatient surgery by then.”

Roethlisberger is more concerned about rehabbing the left knee he has now. He was playing his best football and was the leading candidate to be NFL MVP going into the Miami game. He knows if he misses many games he won’t win.

Not that he cares.

“I’ll take a Super Bowl over an MVP any day.”

The thought of that still maybe happening for the Steelers this season fuels Roethlisberger’s rehab.

It gets a guy through a lot of icing and elevating.