Brett: “I love that guy”

Home/News/Brett: “I love that guy”
Previous Next

Brett: “I love that guy”

Brett Keisel was a call-in guest today on the DVE Morning Show and among the topics he discussed was #7 wearing the #99 in training camp: 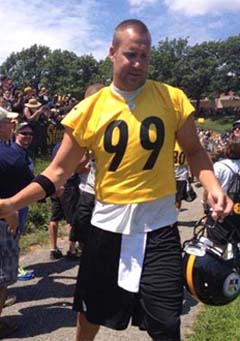 That was awesome of him.

Ben and I are great friends and we have grown up a lot together, and you know, for him to do that for me…it meant a lot to me.

It was tough not knowing what was gonna happen, and to see him non verbally make a statement for me, meant a lot to me.

I really appreciate him doing that. I love that guy.


You can read more at Brett’s website here, and listen to his interview here.

Looking ahead to Sunday –


“No quarterback ever beat the Browns as much as Terry Bradshaw. That is, until Ben Roethlisberger came along.” — Steve Doerschuk, Canton Repository. 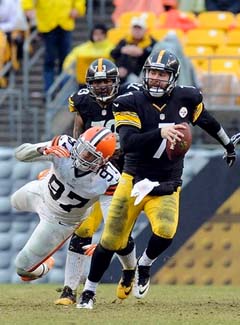 The pretend games are over. It’s time for the Browns to think about the Pittsburgh Steelers.

The contemplation begins with Ben Roethlisberger.

Big Ben casts a shadow over Cleveland’s hopes to end an 0-10 slump in season openers. The Findlay, Ohio, native’s record against the Ohio rival is 17-1, including 9-0 in Pennsylvania.

The Browns haven’t faced a quarterback with such frequency long before the move to Baltimore, when Terry Bradshaw was the Pittsburgh slinger.

Big Ben has been a bad experience for the Browns.

Three years before the ‘04 draft took Roethlisberger to Pennsylvania, Mike Pettine was a high school football coach in the state. As he prepared to face Pittsburgh as the new head coach of the Browns, Pettine said that “about 30 teams” do not have quarterbacks who can elevate the rest of the team when the supporting cast is full of holes.

Asked where Roethlisberger fits into such a discussion, Pettine said:

“Everybody would basically say that it’s Brady and Peyton Manning … guys that have had different supporting casts through the years.

“I’ve gone against Brady virtually every season that I’ve been in the NFL (coaching the Ravens, Jets and Bills)…I’d put Big Ben right up there next to him because of the way he can extend plays. Not only is he a good pocket passer, but he has the ability to turn it into street ball.

“Early on, it was probably one, five, six, seven times a game. Now, it’s two three, four times a game. But if you can’t defend those plays … he’s so problematic.”