“Getting back to (and winning) the Super Bowl is everything – that’s the goal that would mean so much to me, this team, the fans and the Rooneys. It’s where we want to be.” — Ben 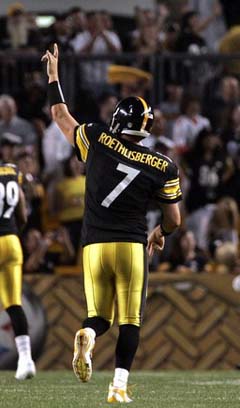 “It’s a little disappointing,” Roethlisberger told USA TODAY Sports. “But you move on. I can’t worry about those things other people are saying. Being voted captain, I think speaks volumes about my leadership.”

What Roethlisberger didn’t say was how he paid for his receivers to spend an April week working with him in Southern California along with top draft prospect and now Jacksonville Jaguars rookie Blake Bortles. He shares the same agents, Bruce and Ryan Tollner, as Roethlisberger.

“It was big for those young guys, a smart move by Ben,” offensive coordinator Todd Haley told USA TODAY Sports. “He wants to be great and wants us to be great. He’s always had the capability to be that guy.”

What really matters now is what happens come Sunday’s season opener against the visiting Cleveland Browns.

It helps that Roethlisberger has never lost to the Browns at home during his 10-season career.

The Ohio native doesn’t plan on things changing Sunday when the Steelers start their 2014 revenge tour — bent on a bounce-back campaign after two years failing to reach the postseason.

Roethlisberger, 32, is getting the ball out quicker and embraces the no-huddle scheme that enabled the Steelers to go 6-2 down the stretch of last year’s 8-8 disappointment, Pittsburgh’s second consecutive playoff-less finish.

A quarterback who has been sacked 386 times is more confident knowing he might have his best group of protectors yet following the offseason hiring of 33-year NFL coach Mike Munchak.

“They’re a good young group and a lot of it has to do with their Hall of Fame coach and they’re absorbing everything he says,”Roethlisberger said. “They’re may be one of the closest groups I’ve ever been around with their cohesion and inside jokes. You see the development from them every day.”

And Roethlisberger’s third-down security blanket, tight end Heath Miller is all the way back from his late 2012 knee injury.

“One of the hardest workers I’ve ever been around,” Roethlisberger said. “I pray he has another great year.”

His teammates and fans pray for the same from their quarterback who looks primed for a career year.