“Road show: Steelers fans make themselves right at home in any stadium” 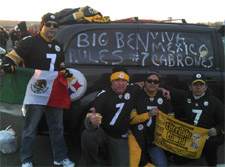 Broncos linebacker Joe Mays was strolling through the grocery store earlier this week when he spotted a family decked out in Pittsburgh Steelers garb.

The invasion of Pittsburgh fans has already begun. In his own neighborhood, no less.

Billed as Broncos country, this region will be transformed into Steelers territory with Ben Roethlisberger & Co. arriving in the Mile High City for a first-round playoff game.

Pittsburgh fans have always traveled well for big games, doing their best to bring some home-field advantage on the road with their numbers and noise.

That’s why Broncos coach John Fox urged fans not to sell their tickets to Steelers supporters. The last thing Fox wants to see this weekend is a sea of yellow Terrible Towels in the stadium.

“I would encourage all of them to keep their seats so to speak and not sell them to Pittsburgh fans, so our stadium remains as active and loud as it’s been,” Fox said. “More blue and orange as opposed to (black) and gold.”

The sight of so much black and gold on the road never gets old for Roethlisberger.

“I think it kind of blows most people away,” he said. “When you’re on the road and you have guys on other teams that aren’t used to seeing that, and all of a sudden they see the Steeler fans come in and their like, ‘Holy cow, what’s going on?’ It’s a pretty neat feeling.”

You can see a larger version of the photo of Roger Saucedo and his friends here.