“The banter of brothers”

Home/News/“The banter of brothers”
Previous Next

“The banter of brothers”

Fans who attended the Rams vs Steelers game on December 24th were given the opportunity to read an excellent article in the Steelers Game Day program on Brett Keisel, written by Ryan Scarpino. The article, with interviews with Brett, his friends, and his teammates is entitled, “Grounded by Greybull”.


Below are excerpts from Ben’s interview with Mr. Scarpino about his friend Brett: 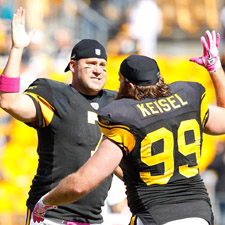 Lane Keisel taught his son at an early age to respect nature, to learn about and understand his surroundings. Still an avid hunter and fisherman, Brett remembers and lives by those lessons. “The biggest thing I learned about hunting is just being outdoors,” said Keisel. “I love seeing what’s on Mother Earth. Listening to Mother Earth. Just the atmosphere of that solitude. It’s so peaceful.”

Ben Roethlisberger has been on several of these expeditions with Keisel, and so he knows first-hand what it’s like to spend a week with the modern-day version of Jeremiah Johnson. “We actually rode horses up into the mountains,” said Roethlisberger, who once traveled to Wyoming with his father and two uncles to enjoy the Keisel experience. “We camped, hunted and fished for a whole week. We were 10,000 feet up in the mountains. To have that trip was just awesome.”

Listen to Roethlisberger and Keisel talk and you can hear the banter of brothers, of two men who love a lot of the same things, and each other. Roethlisberger tells the story of “out-fishing” Keisel during that trip to Wyoming and Keisel finds a way to acknowledge defeat and take credit for the win at the same time.

“Absolutely he’s beaten me,” said Keisel. “But you have to understand that Ben is a winner. He’s beaten me fair and square but that’s only because I’ve taken him to the hotspots.”

Answered Roethlisberger, “I don’t think people understand how much Brett and I are alike. We both like the same things. That’s why we get along so well.”