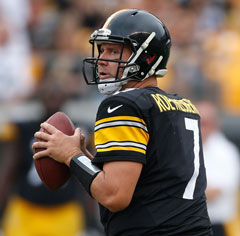 What it means – The Steelers looked like the 2012 and 2013 8-8 teams that found ways to lose games to lesser opponents. They did just that with an uneven performance against the previously winless Buccaneers. The Steelers beat themselves by committing 13 penalties for 125 yards and losing an early fumble that gave the visiting Buccaneers, who needed an early confidence boost in the worst way, a 7-0 lead two minutes into the game. They made one late defensive stand against the Buccaneers but couldn’t do it again after Tampa Bay got the ball back with a little more than a minute left in the game. The Steelers (2-2) had several chances to put the Buccaneers away, including early in the fourth quarter, when a sure touchdown pass from quarterback Ben Roethlisberger clanged off the hands of Antonio Brown. Shelve that talk about the Steelers going on a run. This may well be another .500 team.


Game ball – Roethlisberger became just the 12th player in NFL history to throw for at least 35,000 yards with the same team and he helped pull the Steelers out of an early stupor. With the offense doing nothing and the Steelers facing a 10-point deficit and a third-and-10 deep in their own territory, Roethlisberger completed a 32-yard pass to wide receiver Markus Wheaton, taking a serious shot after releasing the ball.


Miller time – Roethlisberger couldn’t have placed an early pass any better than if he had walked up to Heath Miller and put it in his hands. The normally reliable Miller inexplicably dropped the pass at a time when the Steelers were tripping themselves, but the 10th-year veteran more than made up for it. Miller caught the next eight passes that Roethlisberger threw his way, including a 5-yard touchdown that snapped a 17-17 tie. Miller’s nine catches for 80 yards were both season highs, and he moved into eighth place on the Steelers’ list for career yards from scrimmage. Miller now has the fourth-most receiving yards in franchise history.


You can read the rest of Mr. Brown’s column here.