From ESPN‘s Jeremy Fowler this week: 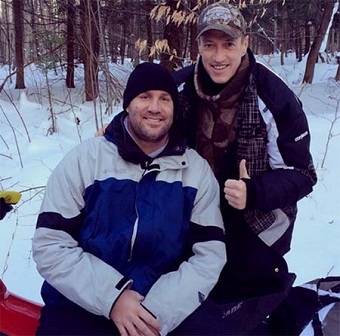 “When you’re up and around each other for four or five days, and you’re sitting around a fire, you talk about everything,” Roethlisberger said.

As the Pittsburgh Steelers make their first appearance in Buffalo since 2010, Roethlisberger has been texting with Kelly this week about how to catch up in person before Sunday’s game. They settled on dinner Saturday night.

The relationship stretches far beyond pleasantries — like, 8,000 miles farther. Kelly, the Buffalo Bills great who has valiantly battled oral cancer since 2014, said in a phone interview Thursday between hunting trips that he’s taking Roethlisberger and a few others to New Zealand this offseason for a red-stag archery tournament.

Roethlisberger and Kelly have experience hunting turkeys together. But more importantly for Kelly, hunting is simply an extension of fellowship with Roethlisberger, who met one of his childhood idols at a golf tournament many years ago.

Kelly, 56, is proud to see the growth in Roethlisberger, 34, who once upon a time showed up to an event in Buffalo with security guards. Roethlisberger, who long ago admitted to being humbled by his early career travails, has “no ego, down to earth, cool with everybody,” Kelly said.

“Without a doubt, playing for a franchise like the Steelers, there’s a certain graduation, and when you’re young and going from nothing to a millionaire, that changes you,” Kelly said of Roethlisberger. “But he’s handling himself pretty darned good. He’s far from that. That was a phase.”

The two hit it off instantly, prompting Roethlisberger and several other mutual friends to make the trip to Ellicottville every offseason for the last seven years or so. They slice through the snow outdoors and play pool indoors, with Kelly providing laughter at a no-huddle pace.

Through many conversations, Roethlisberger became touched by Kelly’s story, from his cancer battle to the loss of his 8-year-old son, Hunter, to Krabbe disease in 2005.

To hear Roethlisberger tell it now, he and his wife, Ashley, wanted to honor Kelly’s family and also liked the name. Roethlisberger called Kelly for his blessing, and he was “honored” by the gesture, Roethlisberger said. Kelly used the word “touched.” 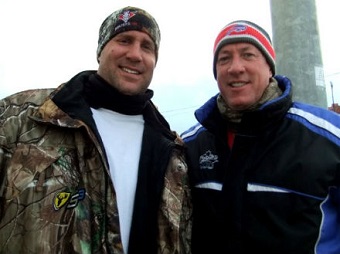 Shared experiences blazed by years of campfire talk gave Roethlisberger someone to trust, a sounding board for his thoughts on life, football, toughness, whatever.

“We talk a lot,” Roethlisberger said. “It’s not like any specific things, but I’ll get texts after games like, ‘Great job, keep it up,’ things like that. Those mean a lot coming from a guy like that.”

Roethlisberger said playing in Buffalo has a “nostalgia” to it because he grew up watching Buffalo’s K-Gun offense. But he’s especially excited to see a healthy and happy Kelly in person.

Kelly was deemed cancer-free in late 2014 but eventually underwent a second round of chemo. Kelly’s fight is not completely over, so Roethlisberger will be reminded of the ‘Kelly tough’ mantra that went viral a few years ago.

“It was scary, obviously, for a long time. It still is,” Roethlisberger said. “He still deals with those things. I know he’s in a good place with the Lord and his family, which means a lot. You don’t want to lose a guy like that. We’re glad he’s still here and going strong. I’m blessed to have him as a friend.”

Kelly’s goal was not to play “papa bear” in Roethlisberger’s life, usually opting for friendly jabbing over packaged wisdom. But Roethlisberger said Kelly’s example is a light in his life, and Kelly hopes his light shines in the direction of others.

“When you go through tough times, so many have it far worse, so how can I make a difference in someone’s life?” Kelly said, about what he’s learned through his challenges. “When you go out, you’re not only representing yourself but your whole family. [Roethlisberger] gets that.”