“That’s December style football there…this time of year you have to find any way possible to win a game. It can be ugly, pretty, whatever it is, as long as you win. I thought our defense was awesome today and [Le’Veon Bell] was spectacular.” — Ben.

From Will Brinson at CBS Sports: 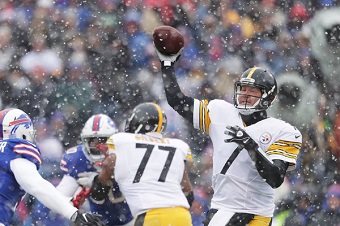 Things are getting down to the nitty gritty in the NFL playoff hunt now, and the AFC wild-card race is about to get wild.

Multiple teams kept their hopes alive with huge wins on Sunday, but no one was bigger than the Steelers, who took down the Bills 27-20 to put themselves into the playoffs, pending the result of the Ravens Monday night game against the Patriots.

Pittsburgh looked just as scary as you would expect them to look knowing their weapons — Ben Roethlisberger and Antonio Brown are deadly and Le’Veon Bell is storming into an offseason that will feature him negotiating a new contract extension. The timing of Bell’s big day, which featured 236 rushing yards and an absurd 298 yards from scrimmage, couldn’t have been better.

The Steelers went on the road in horrible weather and took care of business against a lesser team. It’s what you want to see from a legitimate playoff contender.


You can read more from Mr. Brinson here.

And from Jeremy Fowler at ESPN.com: 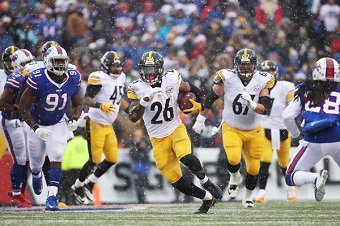 How’s this for dominance: The Steelers handed the ball off to Bell nine times on their 10-play, 82-yard touchdown drive to open the second half.

And he kept getting stronger, touching the ball 42 times by late in the fourth quarter, adding 62 receiving yards on four catches.

Willie Parker owned the previous record of 223 rushing yards set in 2006 against the Cleveland Browns. Bell became the first player in Steelers history to record multiple games of 200 scrimmage yards and three touchdowns.

After making 26 passing attempts to 13 rushes in the first half despite Bell’s averaging nearly 6 yards per carry, the Steelers rightly turned to the “handoff” section of the playbook. Without a clear-cut second receiver on the outside, that’s the best way for Pittsburgh to win away from Heinz Field, where Roethlisberger is more comfortable airing it out.

“Being from not far from here, a couple of hours, you’re used to bad weather playing in the backyard,” Roethlisberger said before the game. “We played in snow, rain and mud, whatever it was. I don’t know if that’s it, or just getting lucky.”

No doubt, Roethlisberger wished he had Bell for those pickup games in Ohio.

He has him now, which makes December a time of comfort in Pittsburgh.