Home/News/Cast your vote!
Previous Next 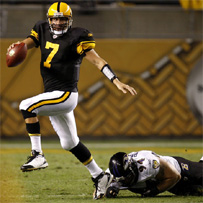 Can the Ravens beat Roethlisberger?

It’s a streak Baltimore Ravens defensive end/linebacker Terrell Suggs still can’t believe, even though he’s lived through it for the past five years.

Pittsburgh Steelers quarterback Ben Roethlisberger hasn’t lost to the Ravens — Suggs’ biggest rival — since 2006. Including playoffs, Roethlisberger has won seven straight against Baltimore and is 9-2 in his career. Roethlisberger was 2-0 against the Ravens last season, which included a playoff win in the divisional round to propel the Steelers to the AFC title game and eventually the Super Bowl.


Mr. Walker wants to know what you think – will the Ravens finally beat Big Ben in 2011?