“I didn’t make plays. I didn’t get it to the receivers or the right guy. I didn’t give them a good ball to run or catch with.” — Ben, on his performance. 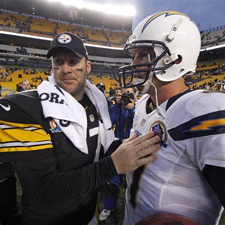 We felt like we left a lot of plays out there. I missed a lot of throws and threw it to them once. We all have to play better.

Maybe later in the week, but not right now.

I have no clue. If I knew, I don’t think that we would do it anymore. We just have to play better.


On the fans booing Mike Wallace –

No one should ever get booed. We’re out there busting our butts, and no one does anything intentionally to hurt the team. I don’t intentionally throw interceptions, and guys don’t miss blocks and fumble or anything…we don’t intentionally do it. I just told him to I was going to go back to him and to keep his head up. He made plays for us late.


On whether he expected to scramble so much today?


On how he felt physically –

Okay. I just have to make more plays and do more to help this team win. 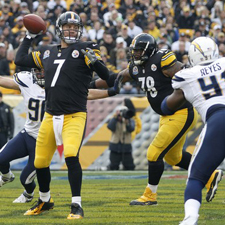 It was the day on which he became the 25th quarterback in NFL history to amass 25,000 yards passing and 1,000 yards rushing in the regular season, but it’s a certainty the distinction means little to him at this time. But Ben Roethlisberger also came back after missing three games with a right shoulder/rib injury and while his performance wasn’t flawless it did reflect the competitor that he is.

Roethlisberger completed 22-of-42 for 285 yards with three touchdowns and one interception, and if the argument can be made that the bulk of those statistics were cosmetic in what turned out to be a 34-24 loss to San Diego, there also is an argument that he was the best on an overall bad day for the Steelers.