No, not those ribs!! 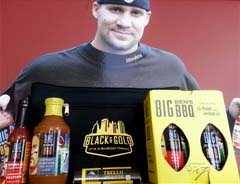 You can now enjoy Big Ben’s baby back pork ribs, shredded chicken and shredded pork at home. Just heat and serve! And it’s perfect for holiday entertaining, not to mention tailgating on game day!

You can order online or in select locations in and around Pittsburgh!

And if you’re looking for gifts for friends or co-workers? Big Ben’s BBQ Sauce comes in Mild, Hot and Honey Mustard flavors. You can also try his Hot Sauce and Spicy Wing Sauce.

Inside a special black and gold canvas cooler that holds 12 beverages, you’ll receive:


As a special promotion, be our 100th emailer and you will receive a complimentary Big Ben’s BBQ Cooler to get your holiday started off right!

A winner will be announced later this evening!

*A portion of the proceeds are donated to The Ronald McDonald House of Pittsburgh.


UPDATE! We have a winner!!! Congratulations to New York City Steelers fan Jonathan Ortiz! He was our 100th emailer!

Thank you to everyone who entered the contest!