Home/News/Check ’em out!
Previous Next

The art of Larry Klukaszewski: 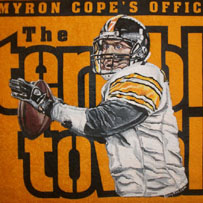 Larry is an elementary school teacher who is successfully running his own sports art company, Larry Klu Productions. In November 2007, he left his house one cold night to sell some simple sketches as Christmas presents from the back of his Blazer, and just three short years later, he can now say that his work resides in the collections of many prominent athletes, past and present, most recently, Sidney Crosby of the Pittsburgh Penguins.

Larry has designed hand-painted footballs for Steelers players Heath Miller, Brett Keisel, and James Farrior and a hand-painted helmet for Hines Ward, which he presented to Hines on his show in December of 2008.

He has also painted the likenesses of professional athletes on jerseys, baseballs, hockey sticks, bowling balls and even Terrible Towels, like the one above with Ben’s likeness.

But Larry said his proudest moment came when he was able to personally deliver a custom painted NFL Duke portrait ball of Mr. Rooney to him during a visit to the Steelers Chairman’s office. The ball can now be seen permanently displayed by the Steelers in the Great Hall at Heinz Field.

Larry has worked on projects for James Farrior’s 51 Foundation and for Heath Miller’s annual Glimmer of Hope event which raises money in the fight against breast cancer.

But his work isn’t limited to homes of athletes – fans can special order custom designs from Larry as well!

The art of Bob Cherewick: 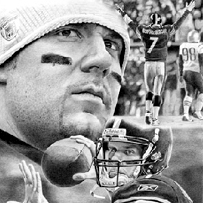 Bob is a Findlay, Ohio native who worked in the corporate world for 15 years before realizing his dream of creating illustrations with meticulous detail and realism.

His first piece, “The Rookie” (at left) was the result of his being inspired by Ben’s rookie season.

“I had the opportunity to watch Ben play a few high school football games back in 1999, and I was very impressed,” said Bob. “I had a lot of fun following Ben’s first year in the NFL. Not only was his play tremendous, but he handled himself in a way that you couldn’t help but admire. For the past several years I had toyed around with the idea of creating high quality illustrations of sports celebrities, but never got the necessary inspiration to do anything about it…that is until Ben broke practically every conceivable record in the book as a rookie. That inspired me.”

That limited edition print is still available in limited quantities and would be a perfect addition to your Steelers-themed rec room or “man cave”!


You can visit a special page on his website to see a larger version and to purchase.


Bob’s other works of art can be seen and purchased here.