The AFC North blogger has finished the compilation of his top 40 players in the division with numbers 1-4 today: 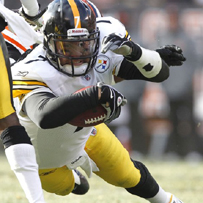 At the number 2 spot again this season –

Analysis: Off-season turmoil turned into in-season triumph for Roethlisberger. He overcame a four-game suspension for violating the NFL’s personal conduct policy to lead the Steelers to Super Bowl XLV. Roethlisberger, who was never considered a workout warrior, worked extremely hard in the offseason and during his suspension in an effort to make it up to his teammates and the Steelers organization. Pittsburgh offensive coordinator Bruce Arians said Roethlisberger has never been better than this season, and we agree. Roethlisberger threw for 3,200 yards and 17 touchdowns in 12 games. But a key area where he has improved is reducing turnovers. Roethlisberger plays a backyard style but his five interceptions were by far the lowest of his career. At 28, Roethlisberger is now entering his prime and is really building a strong case for the Hall of Fame.

“There is no player like Polamalu in the NFL. He blitzes and hits like a linebacker and covers like a corner, making him the ultimate chess piece for Steelers defensive coordinator Dick LeBeau.”


You can check out the Mr. Walker’s entire Fab 40 list here.