Christmas is just around the corner…

Home/News/Christmas is just around the corner…
Previous Next

Christmas is just around the corner…

And if you’re looking for an exciting gift for that special youngster, how about a gift certificate to attend Ben’s Youth Football Camp next summer?


“I just want to say how impressed I was with all the interaction that Ben had with the kids – the way he went out of his way to make it special for them. In addition to signing all the autographs and passing to all the kids – he was in their games, interacting, and just enjoying playing with them. It was obvious that he truly does this for the kids and that he enjoys it.” – Janet Parker, June 25, 2011 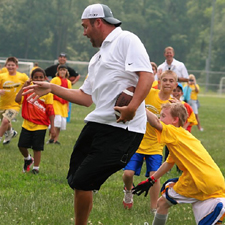 A Christmas gift certificate from ProCamps includes registration in The 2012 Ben Roethlisberger Football Camp plus $80.00 in upgrades, “School of the Legends” online training, a personalized commemorative certificate, a camp t-shirt and a greeting card! The Camp accepts boys and girls ages 7-14, and is held in June at Seneca Valley High School in Harmony, PA.

Last June, Ben hosted 500 children at his Football Camp and according to parents and grandparents, the Camp was a big success and their youngsters enjoyed every minute.


“Ben was obviously having a great time with the kids. He was running around cheering them on and jumping into games. The amazing thing was that he threw a pass to every single kid at the camp – nearly 500 passes. I was thinking that if he throws an average of 30 passes in each regular season game, that would be about 480 passes for the season. He threw more than that in a half hour at the camp. Our kids caught both of their passes from Ben and by the end of the two days they were tired but very happy we came.” — The Dupray Family, Fairfax, VA

Ben has some great instructors on hand to guide your child through drills and fun activities and he brings along buddies like Brett Keisel, Willie Colon, Charlie Batch, and even Coach Tomlin to work with the campers too!


You can enjoy two video’s made during the Camp by Nick Sampson, Quest for the Continent Productions:

You can see another video from the Camp on the site’s Community page.

Still not sure? Check out these great photos from parents and grandparents taken during the camp.

For more information or to purchase a personalized gift certificate, please contact Jake Moylan at 888-389-2267 or jmoylan@procamps.com or visit their website!

Congratulations to Brett Keisel, named the Steelers 2011 Man of the Year! 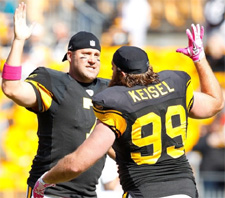 The award recognizes a player’s off-the-field community service as well his playing excellence. The overall winner will be announced during Super Bowl XLVI week in Indianapolis.

You can congratulate Brett on his official Facebook page here.

“QB Ben Roethlisberger continues to be a truly unique, elite QB, and the Steelers defense is beginning to return to the turnover group we are used to seeing.” — Brian Billick, former Ravens Head Coach and current FOX NFL Analyst, from his column today.