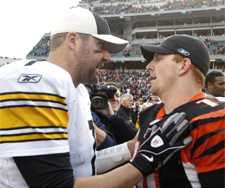 Steelers QB Ben Roethlisberger had a lot of good things to say about Andy Dalton after the game on Nov. 13. During a teleconference on Wednesday he was still very complimentary.

Said Roethlisberger of Dalton: “The things that he does that you just see or expect from rookie quarterbacks. Anticipating throws. There were a couple of throws last time we played them, and I was on the sideline and I told the story of when, but we’ve got a guy right in his face, the receiver is still running a route, he throws an out route and the guy breaks right to the ball and its perfect. Some of the things he did were really impressive. Right now I think, and I don’t know how the talk is, but he’s rookie of the year. I think he’s that good of a quarterback.”