CJ now has TWO Steelers summers he will always remember

CJ now has TWO Steelers summers he will always remember

…thanks to Big Ben!


What started out as a “thank you” tweet from CJ yesterday, has turned into a full fan story today that he wanted to share with Steeler Nation: 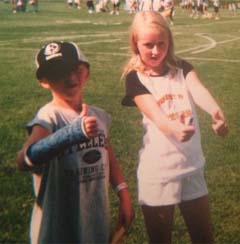 Back in Ben’s rookie year, my mom, dad, sister, and our close family friend Cat went down to Latrobe for training camp! I was really excited about the Steelers drafting Ben earlier that year and he was the main player that I really wanted to see. Although I was only 7-years old at the time, I studied Ben like Adam Schefter, and all the major sports analysts would. When we drafted Ben I was happy because he was a big, strong-armed quarterback.

I was really excited to think that I might meet him! We got there and actually met a whole bunch of players like Jerome Bettis, Willie Parker, and James Harrison, but it was near the end of practice and I still hadn’t seen Ben. Then he came up the steps and I ran up to him as fast as I could and said, “Ben! Ben! I’m a big fan!” as the excitement poured out of me. To my surprise Ben picked me up in front of everyone and said “I’m a big fan of you too, buddy!”. I asked him to sign the cast on my wrist and he did! It was the best moment ever!

I have to admit, that first year when Ben came in the game after Tommy Maddox was hurt and led us to a 15-1 record I felt like a good luck charm every time they scored because I would point with my cast towards the TV! lol.

Then the worst happened, at least for a 7-year old! My wrist healed, my cast came off, and my mother threw it away, even through all the hissy fits and temper tantrums I threw (because mom’s do stuff like that!). My autograph was gone! 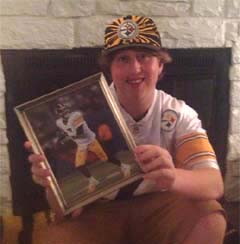 This summer, and ten years after my first autograph from Ben, my mom bought our family six tickets to the preseason game vs the Giants. While we were in town for the game, my mom started up a conversation with someone at a restaurant, and after she told him the “story of the cast”, she found out that he knew Ben! He took her information and said he felt strongly that Ben would want to replace my lost autograph, but told my mom not to tell me!

Then yesterday when I got home, my mom gave me an envelope and it was addressed to me from the Steelers! I opened it and there it was…a new autographed picture of my favorite player, Big Ben with the phrase on top “CJ – Still a fan of yours! Ben”!!

It was one of the greatest and most shocking surprises I’ve ever had. I would definitely like to thank Ben for what he did. It honestly meant a lot to me because ten years later I still remember the moment he picked me up when I was a just little kid at camp!

Thank you Ben!! From your STILL biggest fan, — CJ

CJ’s older sister Tess (in the photo with him above back in 2004), wanted to send her own “thank you” to Ben:

“CJ and I have been Steelers fans since birth, and the whole way to training camp that year, he couldn’t stop talking about how excited he was to see Ben, nonetheless to meet him! When he had his encounter with him, that was the happiest I’d ever seen him. Now, years later, Ben brought that glow back that I remember so well. Ben gave him something that meant so much to not only him, but our whole family, and we’re eternally grateful to him for that. We can’t thank him enough!” — Tess Alexander


Thank you to both C.J. for sharing his story and photos, and to his big sister as well!!