Followers of both our Twitter and Facebook pages know this is a regular, weekly feature. But this Warrior Wednesday photo & story we decided to share here as well!


“It was truly an honor to spend some time with the Steelers during their training camp. Everyone was incredibly nice and treated me as if I were the super star athlete. Coach Tomlin asked if I would share my story with the team, I had everyone’s undivided attention, and it was an amazing feeling to have the Pittsburgh Steelers interested in my story. It was a weekend I will never forget. Thank you for everything Ben.” — Noah 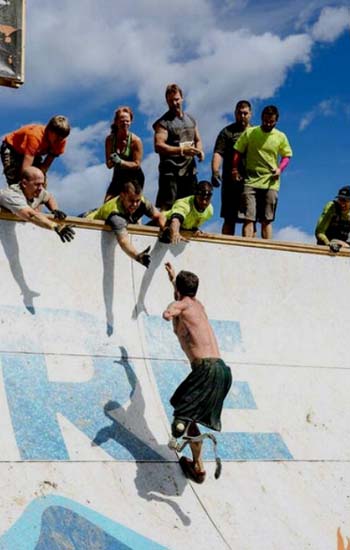 Just a few weeks ago, Noah Galloway, was invited to Steelers training camp by Ben. He was on the field during practices, and spoke to the team about working and living through adversity – something he knows all about!

On December 19, 2005, Sgt Noah Galloway, US Army, lost his left arm above the elbow and left leg above the knee in an Improvised Explosive Device (IED) attack in Yusafiah, Iraq. He was quickly transported to Germany to receive medical treatment and was unconscious for five days. Noah woke up late in the evening on Christmas Eve to find out he had lost two of his limbs, and had also sustained several injuries to his remaining leg and his jaw. He was then transferred to Walter Reed Army Medical Center in Washington, D.C where he began his long road to recovery.

Since his injury, Noah has participated with friends in three Warrior Dash events, three Tough Mudder events, a Spartan race and a Barbarian Challenge.

In the past year, he competed in two CrossFit events. As a member of TEAM X-T.R.E.M.E. Noah has completed a Tough Mudder challenge, the Bataan Memorial Death March as well as a Spartan Race. Noah ran his first full marathon (26.2 miles) in October 2012 during the Marine Corps marathon in Washington, DC.

In March of 2013 Noah returned to New Mexico for the Bataan Memorial Death March where he successfully ran the full 26.2 mile course. Noah has also been to Carastensz Pyramid (one of the seven summits of the world) as part of a climb with The Heroes Project.

NOTHING can stop this Warrior…any day of the week!


You can read more about the incredible Noah here!

You can read more about his visit to Steelers training camp this summer here.