Coach Tomlin: ‘In regard to Ben…’

Home/News/Coach Tomlin: ‘In regard to Ben…’
Previous Next

Coach Tomlin: ‘In regard to Ben…’

Ben Roethlisberger sat on the Steelers bench for an extended period of time following Sunday night’s Wild Card Round loss to the Cleveland Browns, with his center Maurkice Pouncey next to him. Many wondered what was going through the quarterback’s mind, if he thought it would be his last time in the black and gold. 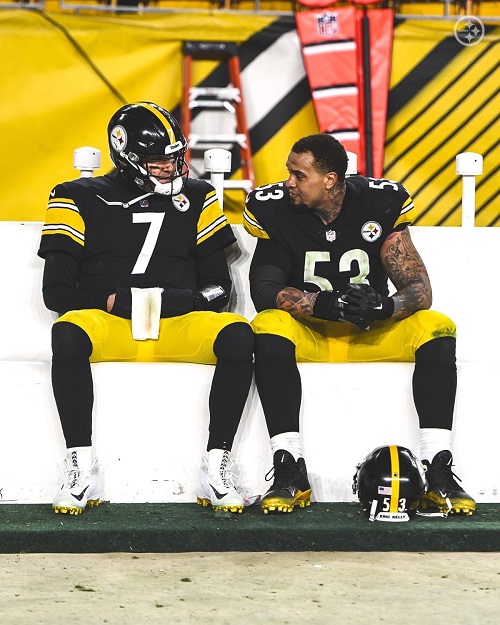 On Wednesday, a few days after the dust settled but the pain of the loss hadn’t, Coach Mike Tomlin was asked about Roethlisberger’s future, and if he had made a decision on whether or not he wanted Roethlisberger back, and to assess his play.

“We haven’t made any decisions about any of our personnel along those lines,” said Tomlin. “All of those discussions are interrelated, and we are just beginning to scratch the surface in terms of what 2021 looks like in terms of the makeup of our team and the issues relative to it.

“In regard to Ben, I can’t say enough about his performance this year. With the uncertainly coming off of injury, and particularly not having an opportunity to perform in preseason games and so forth, there really was a high level of concern about his health and his ability to perform. I can’t say enough about his efforts. I can’t say enough about the efforts of our medical staff and our rehabilitation staff that worked hand in hand with him to get him to that process and get him to stadiums this year. I was more than pleased with the performance of his health and his ability to stay up. In terms of the quality of his play and our play, we’ll begin to assess that in the upcoming days, but in terms of him responding to the challenges that he specifically came into the season ready to face, spectacular.”