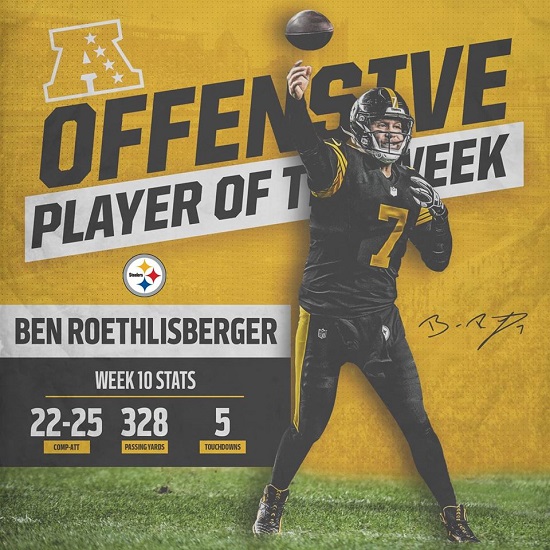 “We have a lot of weapons and the offensive line protects well. I can’t say enough about how well they played. It’s a really good defense and they protected me. It’s a good team win against a really good team.” — Ben.

Nobody’s perfect. Well, maybe some people are at least for a game. Last Thursday night Ben Roethlisberger was just that in a 52-21 win over the Carolina Panthers at Heinz Field.

Roethlisberger completed 22 of 25 passes for 328 yards, with five touchdowns, no interceptions, and a perfect quarterback rating of 158.3, before coming out early in the fourth quarter.

Seven different players scored and 10 players caught passes from Roethlisberger. On the Steelers first offensive play of the game Roethlisberger hit JuJu Smith-Schuster in stride around the 47-yard line and he took it 75 yards for a touchdown to tie the game, 7-7, and there was no turning back.