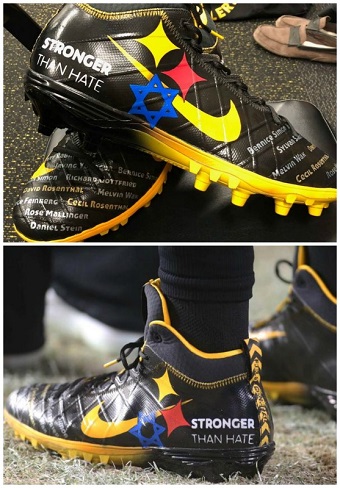 The past two week Steelers Quarterback Ben Roethlisberger has worn “Stronger Than Hate” cleats to honor the 11 lives lost during the Tree of Life synagogue shooting on October 27.

Jennifer Halle, an employee at the Fan’s brother station KDKA Radio, lost her uncle during the shooting. Halle was so touched by Roethlisberger’s gesture she wrote a hand-written note to thank Roethlisberger for honoring her uncle and the 10 other lives lost.

“That’s touching. That means a lot. Obviously I’m so sorry for her loss as well. So is everybody who lost somebody that they knew or loved those weeks ago . . . in Baltimore I just wore the kind of plain white with the “Stronger Than Hate” logo on it. That’s the first game since the incident, obviously the first game was the next day,” said Roethlisberger.

Roethlisberger said during his weekly show on The Fan, it was a way to honor, remember and think about the victims.


“Carolina was our first home game since we had some time to reflect and everything. I had some shoes made. They had the ‘Stronger Than Hate’ logo on the back and then had all the victims’ names on the toe. Really it was just a way for me to really honor those people and their families. You know, so many times it’s easy for people that weren’t directly affected, you know someone like me or somebody that didn’t have an immediate family member or whatever, to just kind of move on. And it’s not easy for other people that did lose somebody to just move on. And so I’ve always said how proud I was of all the guys on our team that we’ve been able to give the fans, give those people maybe three hours of a break. Not to forget, but just to kind of take their mind off it for a little while. And we’ve been able to do that the last few weeks.”

Roethlisberger adds he and some others went to dinner Monday with former Steelers community relations manager Michele Rosenthal, who lost her brother’s Cecil and David Rosenthal during the shooting.


“We went to dinner with her and her parents and Brett and Sarah Keisel and her parents were on their way out of town and so I gave those shoes to her mom as a token of our love and thoughts and supports…it’s just a way that we say that we’re never going to forget.”

You can read more & listen to his full show here. 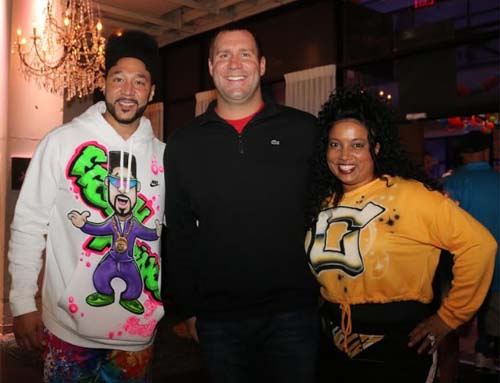 Ben poses with Charlie Batch, host of the Best of the Batch Foundation’s 12th annual “In the Pocket” event.

You may be asking, “Has Charlie changed his look?”.

Only for the event! The theme of ‘Throwin it Back to the 90s,’ featured Charlie as The Fresh Prince. He was joined by both current and former Steelers players who took on fans in an array of games, all for a great cause!