7-year old Cooper and his big brother, 11-year old Brett had the opportunity to meet Ben in Norman, Oklahoma on Sunday, February 27th. 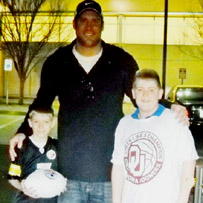 Ben was in town to attend sister Carlee’s games as her Oklahoma Sooners finish out their final home games of the season.

According to the boys’ grandmother, Cheryl Kent, Cooper is a “huge” Ben fan as well as a big Steelers fan and has been since he was 3-years old. “He knows everything there is to know about Ben,” said Cheryl. “He can even give you details about the Super Bowl when they beat Arizona, he was 5 at the time.”

Cooper wears his Big Ben jersey and carries his football to every OU Women’s Basketball game in hopes that he will see Ben! Cheryl said that on Sunday “luck was on our side, he was there!”

Cheryl snapped a photo of her grandsons with Ben after the game.

“Ben was so kind to autograph Cooper’s football and meet the boys after the game! His small act of kindness made a little fan the happiest little boy in the world. I am so impressed at how nice Ben was and how he went out of his way for these two little boys.”


*Thank you so much to Cheryl for sharing the photo and the story!


You can see a larger version of the photo in the Lil Fans album here. There is also another photo of Cool Cooper in the same album!


“I just can’t say enough how great Ben was with the kids. We had Heath Miller, Brett Keisel & Chris Hoke come and work with the kids and they were great, too. However, when Ben showed up, it was absolutely electric!!” – Anita Doddroe, whose son attended the Camp in 2010.

Join Ben this summer for some football instruction and fun at his Football Camp for kids, sponsored by ProCamps Worldwide! 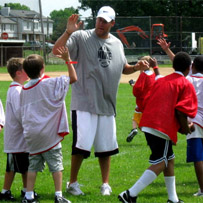 Campers will participate in daily games, stations, and skill contests. Each camper will be placed on a team according to his or her age group.

Each day, the campers will experience various stations, specializing in fundamental skills of football. Individual groups will be small to assure that each camper gets maximum instruction from the top football coaches in the Pittsburgh area.

Ben will give daily talks highlighting the finer points of the game of football and beyond. Parents and guests will be able to listen to camp guests in designated areas at each location.


Each camper will receive –


A fun and educational experience is guaranteed!

You can register your youngster here.

There is also info on how to purchase a personalized gift certificate to attend – a perfect birthday gift!

Also, to learn how your youth football team can attend, click here.


You can see more photos, like the one above by fan Anita Doddroe, here (second row).

On NFL Network this weekend:


You can check out their full schedule here.