“She was always ‘Ben’s little sister’ but she’s made a name for herself. It’s really neat to see how she took it to the next level. It’s great to see her have so much success.”  — Ben.

From Mike Baldwin in The Oklahoman this weekend: 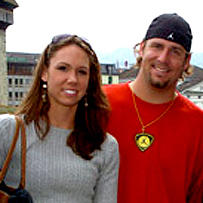 The day she arrived at Oklahoma, Carlee Roethlisberger was known as Ben’s younger sister.

It was expected territory when your older brother is the quarterback for the Pittsburgh Steelers and has won Super Bowls.

Carlee, though, has made a name for herself on OU’s women’s basketball team, which closes out the regular season Saturday at Texas Tech.

“We were pretty far apart in age growing up, but we’ve gotten closer as we’ve gotten older,” Ben said. “I wanted to see these last two games, especially be there for Senior Night.”

Carlee never downplayed the relationship. On Senior Night she told the crowd she’s proud to be Ben’s “little sister.”

“No one wants to live in someone’s shadow their whole life,” Carlee said. “But when the shadow is as big as his, and he’s done such amazing things, you’re so proud of him. We’ve always been competitive. He’s always pushed me. Big brothers don’t let your head get big. That’s their job.”

Carlee smiled when informed Ben sometimes is asked how his sister is doing at OU.

“That’s awesome. Hopefully he gets a kick out of that,” Carlee said. “Maybe he’s gotten a little taste of what I’ve gotten my whole life.”

Update: You can see video from the Sooners WBB Senior Night Ceremony here.