Cotchery: “We stuck in there together”

Home/News/Cotchery: “We stuck in there together”
Previous Next

Cotchery: “We stuck in there together”

Players who come to the Steelers from other NFL teams see the difference, and they like what they see –


“A lot of teams scream ‘family.’ They throw out the word ‘family,’. This was truly a family-type atmosphere here this year. We had a lot of adversity, and a lot of it was caused by us. But at the same time we stuck in there together, there was never any finger-pointing. Guys just got better and we ended up being 6-2 the second half of the year. I think a lot of guys are proud of that. This is a special place. I noticed that from my very first visit here.” — Jerricho Cotchery

More from Mike Prisuta’s interview with Steelers players at Steelers.com: 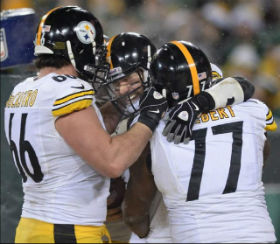 They came here to play football, but they learned that signing a contract with the Pittsburgh Steelers made them part of a family, part of an organization in which the ultimate goal is unmistakable even in a season that ultimately fell short of the playoffs.

“They treat you like men here,” center Cody Wallace observed. “They have that focus. Everybody’s going for the same goal. And here you can actually talk about the Super Bowl and be serious about it.”

Tight end Michael Palmer came to the Steelers after stints with the Falcons, Giants, and Seahawks.

“It’s hard to really put it into specifics, but things here are just different, from the organization to the tradition of winning,” he said. “I had a lot more fun here. It’s a lot more relaxed environment, not in a bad way but in terms of enjoying every single day.

“You don’t wake up almost dreading coming in some days, even when you lose, because you know you’re getting constructive criticism and continuing to get better no matter what happens.”

Safety Will Allen had been down this path, and more than once. Allen spent the 2004 through 2009 seasons in Tampa. He was with the Steelers for the following three seasons and returned from Dallas after the first five games of this season.

“It’s the teammates, man, the brothers you play with, you go out to war with every week,” Allen said. “We go out and put it all on the line together. It’s a tight-knit group. You really can’t explain the relationships that you build on this team and with this group of people. That’s one thing that I admire about this team. Everywhere else was way different than it is here.”

Pittsburgh native and backup quarterback Bruce Gradkowski also subscribes to the “Pittsburgh is different” theory after taking the Tampa Bay-to-Cleveland-to-Oakland-to-Cincinnati route back home.