The Browns’ Joshua Cribbs was interviewed for NFL Network‘s new series “Top 100 Players of 2011” and had this to say about the Steelers quarterback: 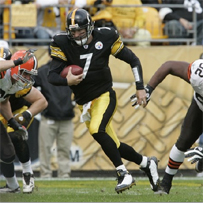 “He’s one of the quarterbacks that has IT. A lot of quarterbacks don’t have that IT factor. You don’t know what it is, you can’t put your finger on it…nine times out of ten you can count on this guy to make a play! He has done a tremendous job for his team, led them to Super Bowl after Super Bowl.

“One thing I can say about Ben is he is clutch. In big games, he shows up. Coaches will harp on how hard it is to bring him down, and they’ll bring up the footage of him shaking off guys twice his size…

“Every team wants a winner, Ben Roethlisberger is winner.”


You can watch video with more of the interview here.