Home/News/Cromartie: Roethlisberger in top 10
Previous Next 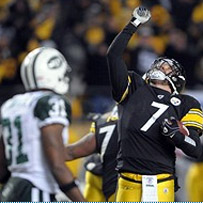 On the heels of Roethlisberger being ranked No. 41 by a survey of more than 400 NFL players, Cromartie expressed his thoughts via Twitter and disagreed with the ranking.

Cromartie’s respect for Roethlisberger is nothing new. During the playoffs last January, Cromartie expressed his dislike for New England Patriots quarterback Tom Brady, then did a complete 180 the following week leading up to the AFC Championship Game by saying, “I love Ben, man. Ben’s a competitor.”