Ben on Jim Kelly: “One of the best to ever play the game.”

Home/News/Ben on Jim Kelly: “One of the best to ever play the game.”
Previous Next

Ben on Jim Kelly: “One of the best to ever play the game.”


From Mark Gaughan of the Buffalo News this evening: 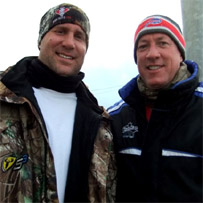 The Hall-of-Fame quarterback, recuperating from recent back surgery, was thrilled with the response to his event, which was held Monday at Batavia’s Terry Hills Golf Course.

Kelly had a fuller-than-normal field of 60 fivesomes on the 27-hole layout and said attendance at the auction and party on Sunday night was a record of about 1,200.

The tournament weekend annually raises more than $200,000 for the Kelly for Kids Foundation and the Hunter’s Hope Foundation.

Roethlisberger is an annual attendee at Kelly’s event. He said he’s in frequent communication with Kelly, even during the season.

“We talk quite a bit. He’s a great guy,” Roethlisberger said. “We talk during the season — good games, bad games. Jim’s to me one of the best to ever play the game. I remember having … I always tease him because I used to have his poster on my wall. He’s a great. That Midwest, Ohio, Western Pa. toughness, we try and pride ourselves on that.”


To read more from Mr. Gaughan on the event, click here.