Dulac: How Ben Roethlisberger gave the Steelers some ‘perspective’ this week

Home/News/Dulac: How Ben Roethlisberger gave the Steelers some ‘perspective’ this week
Previous Next

Dulac: How Ben Roethlisberger gave the Steelers some ‘perspective’ this week

“For a player like Ben Roethlisberger, who was born to play football, it says something about the man. It opens the eyes and hearts of those players who, maybe in the back of their minds, take it for granted.” — Alejandro Villanueva. 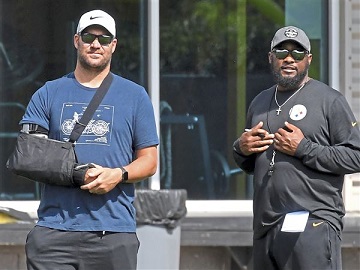 It wasn’t a classic moment that will find its way into sports lore. It did not elicit the same emotional response as Knute Rockne’s “Win One for the Gipper” pregame speech. It did not tug on the emotional heartstrings in the manner Lou Gehrig did with his “luckiest man on the face of the earth” address. Nor was it the life-changing moment speech by Herb Brooks to his U.S. “Miracle on Ice” hockey team.

But before Monday night’s game against the Cincinnati Bengals, the Steelers received a locker-room speech from a person who didn’t even play in the game that many players said was heartfelt and inspiring.

The person was Ben Roethlisberger.

“He just talked about the opportunity and not taking for granted being able to play,” cornerback Joe Haden said. “Coming from Ben, knowing he played such a long time and see how much he misses it, how much he wants to be out there, it puts it in perspective for a lot of guys.”

“That’s our leader, so his presence was definitely felt,” said running back James Conner. “Just having our leader there was huge for us and having him on the sideline, communicating, relaying messages to Mason (Rudolph), him telling us what he sees. He did everything he could except play.”

Roethlisberger usually leads his teammates in a pre-game prayer in the locker room, which he did Monday night. But according to several Steelers players, he also stood up and addressed the team, telling them to appreciate their opportunity, the chance to perform on national television in front of their peers, and understand it can all be taken away in an instant.