“I thought he was awesome. He didn’t just manage the game. He went out and won the game.” — Ben on Mason Rudolph’s performance on Monday Night Football.

From Ben’s interview with Ron Cook, at the Pittsburgh Post-Gazette: 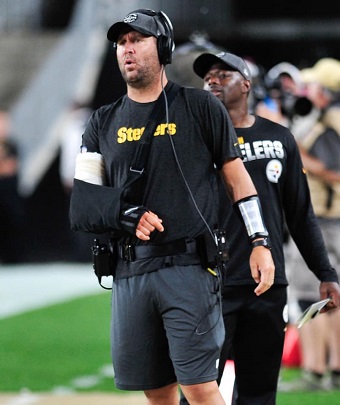 Mason Rudolph received the ultimate endorsement after leading the Steelers by the Cincinnati Bengals for his first win as an NFL starting quarterback.

This was late Monday night after the Steelers trashed the Bengals, 27-3. Roethlisberger stopped on his way out of Heinz Field and made his first public comments since his elbow injury against the Seattle Seahawks on Sept. 15. He spoke not just about Rudolph, but about the team moving forward without him, his surgery in Los Angeles Sept. 23 and his hope to return in 2020 for his 17th NFL season.

“Absolutely, I plan on playing again,” Roethlisberger said. “That’s my absolute goal. That’s why we did the surgery. The reason we did it and did it so soon is because I want to come back. I don’t have any doubts in my head about that. If you have doubts, then you’ve already lost. It’s going to be a long road, but I’m excited for the opportunity to show I can do it.

“I want to go out on my own terms. No one wants to leave on an injury they can’t control.”

“It’s really hard not being able to play,” he said, “but I’m going to do what I can to support Mason and the guys.”


More from his interview here.


*Thank you once again to Ed Thompson for another great action photo from last night’s game!