“It’s definitely different. I wish I knew the offense even better than I do, just because I feel I know my answers will be even more right. I do the best I can to talk with Todd, to know the answers, so I can help these guys because they come to me and ask. And even if they don’t come and ask, even in practice, if I see something, I’ll come up to them and say, ‘Do this,’ or ‘I’m thinking do this.’ It helps to have that growth in this offense.” — Ben

From Gerry Dulac at the Pittsburgh Post-Gazette today: 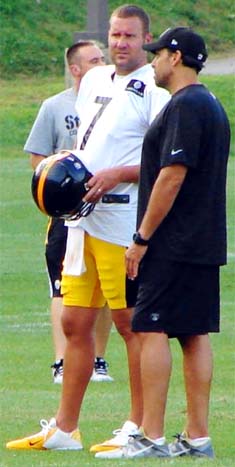 In the second week of training camp at Saint Vincent College in Latrobe, rookie receiver Markus Wheaton ran the wrong route, causing Roethlisberger to throw the ball to the spot where Wheaton was supposed to be. As the No. 3 draft choice came back toward the huddle, Roethlisberger barked loud enough for all to hear, “If you don’t know the play, just ask.”

No. Just a new one. A different one.

Kind of what the Steelers had been hoping to see from their quarterback, who is 31 and entering his 10th NFL season.

“He’s definitely got a chip on his shoulder,” offensive coordinator Todd Haley said. “Nobody liked the way we came down the stretch last year. He’s the quarterback, he’s at the controls. He’s in a great mental and physical place right now, and he just keeps getting better.”

For the first time since he entered the league in 2004, Roethlisberger is now the oldest and most-experienced quarterback on the team. He no longer has Charlie Batch or Byron Leftwich around in the meeting room to discuss the nuances of the offense and dissect and understand opposing defenses. They are no longer there on the sideline to discuss what is happening on the field during a game.

It is not by accident…