The media caught up with Big Ben this afternoon after practice.


Some of the highlights from his interview: 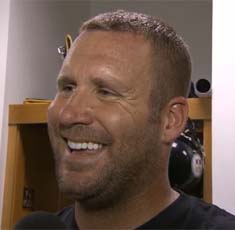 How dependent are you guys on the running game this year?

We always want to be able to run the ball. It makes you more balanced and helps open up the pass and the play-action pass. So, it’s a big key for us. We’ve got guys that have been here and have done it – Isaac Redman, Jonathan Dwyer and Baron Batch. So, we hope we can get him [Le’Veon Bell] back as soon as we can, just as another guy.


Re: Having an edge this week as a team going into the game Saturday:

You want to win every game you play. That being said, I think the ones that start in a couple weeks are a little more important. It’s a good week for us, especially offensively. They have a real good defense and are going to present some looks that we haven’t seen in a while. It will be good work for us.


Do you still have a lot of faith in the offensive line?

Oh yeah, no doubt about it. My faith is at an all-time high with them. I’m not worried about that.

Because I know who they are and what they bring to the table.


We haven’t seen the starting five offensive linemen play together very much. Do you just have enough faith individually in them that it all adds up?

Heath is special. To me, he’s one of the best tight ends in the game. As we say with guys that leave here, we never ask guys to be anybody but the best they can be. So, we’re not asking David Paulson or David Johnson or any of the other guys to be Heath – just be the best they can be and do a great job of filling in until Heath is ready to come back.


You can watch video of Ben’s interview and read more here.