ESPN’s Jeremy Fowler said he had fun writing this story….

Home/News/ESPN’s Jeremy Fowler said he had fun writing this story….
Previous Next

ESPN’s Jeremy Fowler said he had fun writing this story…. 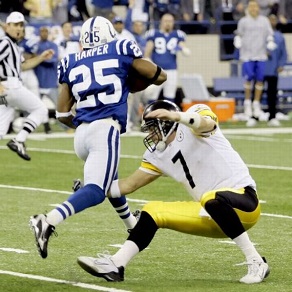 A shared memory can mean something different to those who shared it.

For Peyton Manning, the snapshot of Ben Roethlisberger’s touchdown-saving tackle against the Indianapolis Colts in an AFC divisional-playoff game on Jan. 15, 2006 — 10 years ago Friday — is a bit fuzzy, eliciting an indifference to the moment.

“Some of [my teammates] probably weren’t even born when that game was played, much less they probably don’t have much of an interest in it,” Manning said this week when asked about the Colts’ 21-18 loss to Pittsburgh. “It was a long time ago.”

For Jerome Bettis, though, a diving Roethlisberger clutching cornerback Nick Harper’s right foot and guiding him to the RCA Dome turf signified something much more — the Hall of Fame. Bettis, who fumbled at the goal line with 1:18 left in what could have been his last playoff game, famously said to Roethlisberger at his Hall of Fame speech in August: “Without you, I might still be at the doorstep. I owe you for life.”

Harper recovered the fumble. Thirty-six yards later, he went down. Eventually, so did the Colts. And Bettis went out a Super Bowl winner.

For many others, the tackle sparked an avalanche of emotions that have stayed with fans and former players a decade later for convenient tailgating conversation.

“Before the Cincinnati game, we were at a Steelers function and the play came up,” said Chris Hoke, the Steelers’ nose tackle from 2001-11. “It was a classic year, and that was a classic play.”

Roethlisberger, who declined comment while focusing on his shoulder rehab, made the play, but the moment was about much more. Dungy still wonders how those Colts didn’t win it all.

“That was probably our best team,” he said.

For the tight end, panic …

Miller, a rookie tight end out of Virginia, was a blocker to the right side, tasked with helping create a hole for Bettis to barrel through. Bettis never fumbled, the whole team thought.

Then the ball floated into the air, courtesy of Brackett’s helmet.

“I was on the ground, looking back,” Miller said. “Then I got up and I was just running in a panic. I was running but I wasn’t catching [Harper].”

Miller wasn’t sure anyone would catch Harper, who had the inside track on a coast-to-coast score to take a 24-21 lead.

Suddenly, Miller sees his 240-plus-pound quarterback settling into a slow backpedal. Miller knew Roethlisberger was athletic, but he figured he was doomed trying to tackle a cornerback in about 50 yards of space.

The play was a blur in the moment, but a decade later, Miller’s vision of Roethlisberger snatching the leg feels like a slow-motion NFL Films reel.

“That was probably the most emotional game, highs and lows, that I’ve ever been a part of,” Miller said. “Just the fact he was able to get that guy on the ground, still, I shake my head at to this day. He reached for Harper’s leg and it was like slow motion for everyone. (Recently) someone asked me about ranking playoff games. That one is probably at the top.” 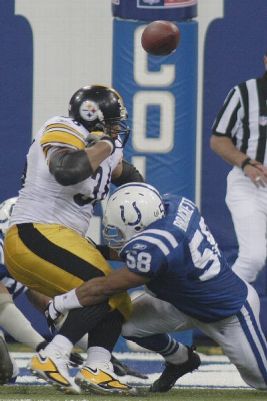 No hyperbole, but Dungy can’t help but wonder whether he’d be a two-time Super Bowl winner had Harper scored. That Colts team was better than the 2006-07 team that actually won the championship, Dungy said.

So when Brackett dislodged the football from Bettis’ grip, Dungy thought momentum had shifted in the building for good.

“We’re going to win this game,” Dungy recalled about his first thought in the moment. “And, then, my second thought was, he actually made that tackle. A quarterback’s not supposed to make that tackle.”

Dungy’s third thought was heartbreak for Bettis, who had declared this was his last season. Dungy always liked Bettis on and off the field. He wanted to win, but he didn’t want to see Bettis lose. Not like this. It would have been an awful way to go out, he thought in the moment.

The Colts still had time to win it, but Dungy said Manning and Reggie Wayne miscommunicated on a presnap hand signal Manning had run hundreds of times before. The mishap bungled a third-down play. Mike Vanderjagt’s 46-yard field goal attempt then sailed right.

Dungy figures the teams are even. He wasn’t so convinced Troy Polamalu’s interception should have been reversed. He challenged the play because he had a hunch, but it was a pretty clean catch.

“You still think about those things from time to time,” Dungy said. “You always think about the critical plays in every game, whether you win or lose them. And there were certainly quite a few in that game.”

For the nose tackle, ‘pure elation’…

Hoke heard a few colorful words from the sideline after the fumble. He remembers a long “ooooh noooo” coming from his mouth as Harper streaked downfield.

The defensive players didn’t have time to be enamored with Roethlisberger’s tackle once it happened. They still had to win the game. But once Pittsburgh secured the win, Hoke had his what-just-happened moment.

“As he was going backward, it was almost like he was trying to slow up Harper until he could get teammates to help him,” Hoke said. “They were coming but couldn’t get there fast enough. So Ben just reeeached out and got one hand on him and barely hung on.”

Hoke was reminded of Roethlisberger’s athleticism every time the two would play pickup basketball and Roethlisberger, at 6-foot-5, would run point. The team knew he was capable of making plays.

Bettis had to rely on teammates to win him the game, which made it that much sweeter when the defense got a stop.


You can read his full story here.

And also from Mr. Fowler:

“The toughness rep: Five reasons Ben Roethlisberger has it” 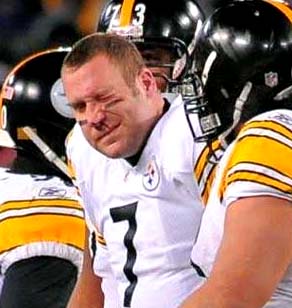 Pittsburgh Steelers quarterback Ben Roethlisberger had just attempted eight passes on a separated shoulder Saturday night when a text popped up from an NFL scout reminding me that Roethlisberger is an “elite” quarterback.

Roethlisberger didn’t need the 18-16 wild-card win in Cincinnati to validate his elite status, but the game solidified Roethlisberger’s reputation for toughness. The drive helped set up a game-winning 35-yard field goal by Chris Boswell.

Roethlisberger’s well-known pain tolerance has the Steelers feeling optimistic about his chances to play Sunday in Denver even though he says he’s torn a few ligaments in the shoulder to go along with the sprained AC joint.

Here are five reasons Roethlisberger has earned this rep:

Games like Saturday night: Roethlisberger didn’t have to re-enter the Bengals game, but he took a painkiller in the locker room, ran back onto the field and got back out there. He could barely throw the ball 10 yards. Still, he kept throwing. That earns street cred with teammates and prompted defensive end Cameron Heyward to offer ice-pack deliveries to Roethlisberger’s house this week if necessary. “For him to gut out a performance like that, I don’t know if any other quarterback could do that,” Heyward said. “The grit and toughness he shows, it’s special. You can’t teach that. We’re lucky to have him on our sideline.”

Never misses extended time: Despite 30-plus sacks per year and several trips to the training room, Roethlisberger hasn’t missed more than four consecutive games in 12 seasons. The list of injuries, though mostly minor, is lengthy. According to ESPN Stats & Info, Roethlisberger missed three games in 2012 (shoulder); one apiece in 2011 (ankle), 2009 (concussion), 2007 (ankle) and 2006 (appendix); four more in 2005 (knee); and one in 2004 (ribs). Fighting through injury is nothing new. He’ll miss some time on occasion, but he’s usually back quickly. He’s going on his fourth injury this season — MCL sprain, bone bruise in his foot, concussion protocol, shoulder — and likely will have missed four of 18 games by the end of this week. Not bad.

Returning from weird injuries: In 2012, Roethlisberger dislocated a rib against Kansas City that could have been much worse. As Roethlisberger told reporters after talking to doctors about the situation: “That’s the more scary part, I guess. If [the rib] goes in the wrong direction, it could puncture the aorta.” Roethlisberger said he had to sleep in a chair for a while. He missed three games. His quick return fueled the Iron Man narrative.

The sacks: Roethlisberger has taken 439 of them. He’s reduced the sacks in recent years but still has 136 more than this week’s opposing quarterback, Peyton Manning, who’s played six more seasons than Big Ben. Getting hit by pass rushers increases the probability of injury (hello, Vontaze Burfict), but it also perpetuates the keep-fighting story line. Fans love to see athletes who can face adversity and keep getting after it. As Roethlisberger says, he’ll never play scared from the pocket. He’ll stand tall in there. He’s not Small Ben. Taking sacks reminds that Roethlisberger is a big guy who can absorb them more than most, which bolsters the toughness quotient.

The weekly drama associated with his injuries: For at least six weeks this season, Roethlisberger’s health has been a major story line. This season is a bit of an aberration because of the volume of ailments, but the weekly updates about Roethlisberger’s status builds anticipation. How’s he progressing? Can he fight through it? When he comes back, and he usually does, it’s a victory for the team, and relief for Steelers fans.


You can read more from his blog here.