Villanueva on Big Ben: ‘I will follow him any day’

Home/News/Villanueva on Big Ben: ‘I will follow him any day’
Previous Next

Villanueva on Big Ben: ‘I will follow him any day’

“When Alejandro Villanueva calls Ben Roethlisberger a leader, he knows what he is talking about” 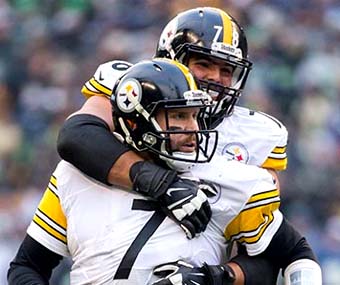 For the first three series of the fourth quarter, Ben Roethlisberger stood on the sidelines, his shoulder aching but more than anything his heart likely aching that he wasn’t on the field with his teammates.

But when it came down to it, when the Steelers season was completely on the line in the AFC Wild Card game against the Bengals, Roethlisberger did what true leaders do. He put the pain as far in the back of his mind as he could and he returned to the game.

“He’s the leader of the team,” said tackle Alejandro Villanueva, a former U.S. Army Ranger who more than anyone on a football field understands the true meaning of leader. “He understands the responsibility. He embodies all of the strength and courage you want to see in a great leader.

“It was encouraging for us on the offense when we saw him come out. And then he started making plays. He is an extreme competitor. We are honored to follow him in this journey.”

Roethlisberger left the game at the end of the third quarter after a sack by Bengals linebacker Vontaze Burfict. The Steelers had a 15-0 lead at the time, but the tide would quickly turn. The Bengals offense would take over, erasing the Steelers lead, going up 16-15. Landry Jones, who came off the bench to start the fourth quarter, threw a late interception that many thought sealed the win for the Bengals. As the Bengals looked like they were going to be able to run out the clock, linebacker Ryan Shazier striped the ball from Jeremy Hill and it was Steelers ball.

And that’s when in Roethlisberger stepped in.

“We didn’t know what to expect,” said Villanueva. “He is slow to get off the ground some times, and rightfully so. He gets hit a lot. As an offensive lineman we have to do a better job protecting him. He took a hit from a very big guy. We were hoping the best for him. It was encouraging to see him come back in.”

The offense rallied around their leader, giving them the push they needed to get into Cincinnati territory, where a pair of Bengals’ penalties put them in field goal position.

“I will follow him any day,” said Villanueva. “He is a guy cheering me when I make a mistake. When I get him hit, he is cheering me, encouraging me. He takes responsibility for everything the team does or fails to do and that is a definition of a leader, a definition I learned in the Army.

“He is doing great things, keeping this team motivated. He is giving direction and purpose to everybody out there. We just have to match his intensity and level of play so we will do great things.”

Also Today, from Ben’s Q&A with the media: 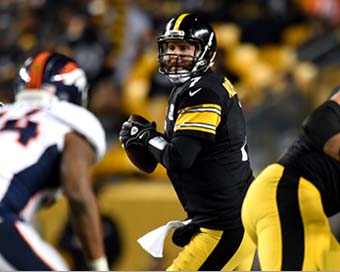 On Tuesday, Coach Mike Tomlin said quarterback Ben Roethlisberger will be managed day-to-day regarding his availability for Sunday’s AFC Divisional Playoff game against the Denver Broncos.

Roethlisberger, who has a shoulder injury, took it one step further when he spoke for the first time this week.

“We will just kind of take it day-by-day, but probably hour-by-hour really,” said Roethlisberger. “I will take a lot of mental reps, get in there and do my rehab and treatment and everything the doctors say to strengthen it and get back.”

Roethlisberger has yet to throw this week and will follow the advice of the team’s athletic training staff and doctors as to the how much work he can actually do.

“Today we might see what I can do, hand off, get mental reps,” said Roethlisberger. “We are going to take it hour-by-hour.”

One thing Roethlisberger won’t do is go out there if he feels like it will hurt the team. As much as he wants to play, if he can’t throw the ball downfield he understands that could be more of a hindrance than help.

“I want to be out there, unless I am going to hurt the team,” said Roethlisberger. “If you can’t throw the ball 25-30 yards down the field, I think you are hurting your team. I don’t think we put ourselves in that situation. If we can find any way possible to get out there where if I can deal with the pain and make plays, I will deal with it.

“I want to be out there with the guys, but I have always said not at the expense of hurting the team. We are going to do everything we can to get it as stable as we can. We will see what kind of pain things we can deal with on Sunday.”


You can watch the video from Ben’s Q&A here.


Did you miss Ben’s radio show yesterday? You can read the recap & listen to excerpts here.


*THANK YOU to everyone who has emailed, left comments on Facebook & tweeted out well wishes for Big Ben!