“For the Steelers it was 20 years of frustration

“For the Steelers it was 20 years of frustration

….but Ben Roethlisberger was worth the wait” 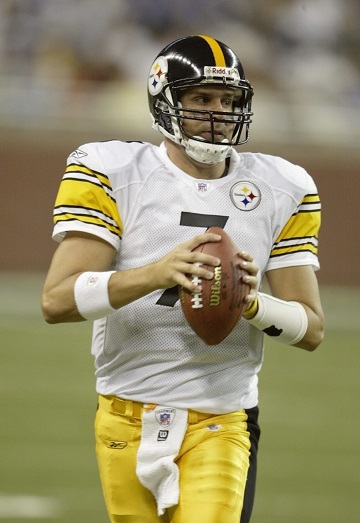 The 1983 Pittsburgh Steelers season was one of the most frustrating and disheartening in franchise history. A promising 9-1 start had Steeler Nation dreaming of one for the thumb. Unfortunately, each week hope was held out for the return of Terry Bradshaw, who was recovering from an elbow injury, to see the Steelers through to that Championship. But the news never came back good and the impatience for QB Cliff Stoudt mounted each week, especially as Pittsburgh lost 4 in a row and championship dreams turned dull.

Down in South Florida, Dan Marino of Pittsburgh Panthers fame was setting new QB standards for the Miami Dolphins, the hometown boy whom Pittsburgh controversially passed on in the 1983 NFL Draft. Marino wanted to play for the Steelers, even wrote letters to Dan Rooney and Art Rooney, with Dan Rooney the advocate to draft Marino, only to be overruled by Chuck Noll.

Bradshaw was finally able to return as Pittsburgh was on the verge of dropping a once all but clinched up AFC Central division. He easily drove Pittsburgh to a 14-0 lead on the strength of 2 TD passes vs. the New York Jets and positioned the Steelers to clinch the Division Championship. However, on that final pass, his elbow popped, and the great career of Bradshaw was over.

The question has been asked many times, how many championships would the Steelers have won if they had Marino in the 1990s? It’s not a question of if, but how many? As it continued into the 2000s, the position of QB exposed the Steelers extremely thin margin of error that existed under Neil O’Donnell and Kordell Stewart. They lost a Super Bowl and chances at a Super Bowl because neither could make the big play under pressure, compounded by the load of interceptions that turned championship dreams into nightmares.

It was a staggering 20 years of making almost no attempt to even look at a franchise QB. There was a lack of aggressiveness to even try, but I truly believe it was due to the performance of one very low-cost free agent with a better pedigree that got the Steelers attention. Upon winning the XFL MVP in 2001, former Denver Broncos QB Tommy Maddox reached out to every team in the NFL asking for a tryout and the Steelers were the only team to answer. Maddox flourished with the Steelers and gave the offense a dimension it had not seen in decades with his ability to sling the ball, breaking multiple records previously set by Bradshaw.

So when the injury ravaged 2003 season tore the Steelers from Championship contenders to a team that had the 11th overall pick and placed the Steelers in position to the best QB prospect since Marino in 1983, Dan Rooney simply was not going to let the same mistake happen twice and nudged Bill Cowher and Kevin Colbert away from addressing the offensive line and to select Ben Roethlisberger. Dan Rooney was not going to let the mistake over being overruled by his football people again. Rooney never got over the mistake of passing up Dan Marino, just as he had never gotten over the cutting of Johnny Unitas. Securing a franchise QB for the future when they had the chance was front and center on Rooney’s mind and despite the confidence they had in Maddox, for once they thought about the bigger picture.

Every season for 20 years I personally went into the draft looking at QBs. I desperately wanted the Steelers to find a QB each season as I scouted potential prospects.

But on April 24, 2004, 20 years of frustration were finally set free. When the Steelers went up to that podium to announce they were drafting Ben Roethlisberger – already dressed in Black and Gold – it was unlike any draft pick the Steelers announced before or since. Historically the best player ever taken 11th overall and arguably the best value the Steelers have ever found in the first round, one thing is certain:

18 years later and thrills beyond expectations, I can say with conviction that it was worth the wait.