Today, Ben announced the fourth grant of the 2012-13 season from The Ben Roethlisberger Foundation at The Giving Back Fund. 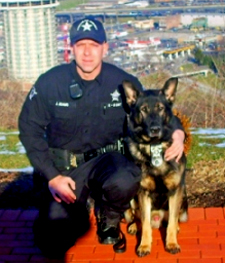 The Foundation will be distributing a grant to the Kenton County Sheriff’s Office just outside of Cincinnati, Ohio where the Steelers will play the Bengals on Sunday evening.

The Kenton County Sheriff’s Office will utilize the grant to replace their existing K-9 with a dual purpose trained K-9.

K-9 Niko, who has been on the force since 2006, has suffered from hip dysplasia and is slated for retirement in the near future. Niko will be taken care of in retirement by his current K-9 handler.

Niko has been a tremendous asset to the Kenton County Sheriff’s Office since his first 30 minutes on duty when, on a routine traffic stop, he alerted his handler to drugs and weapons in the vehicle.

This marks the sixth season that The Ben Roethlisberger Foundation has distributed grants to K-9 units. The mission of the Ben Roethlisberger Foundation is to support K-9 units of police and fire departments throughout the United States with a particular emphasis on support for service dogs in Pittsburgh, PA and to support other charitable organizations, such as the Make-A-Wish Foundation.

You can read more about The Giving Back Fund here.

You can also read about Niko and his partner, Deputy Adams here.