“People make a big deal after Week 1. You lose a game and everyone wants to jump on the hater bandwagon of the Steelers even more than they already are. We just kind of laughed it off and said, ‘You know what, we’ll just do what we do’ and I think we’ve done that.” — Ben on the early-season criticism of the team.

Ben taped an interview earlier in the week that was shown this evening during NFL Network’s Total Access. 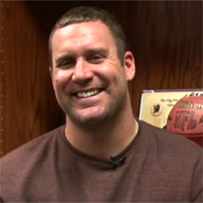 During the two-minute interview Ben responded to questions concerning his thumb injury, the Bye Week, his young wide receivers, Cincinnati’s rookie quarterback Andy Dalton, even his excitement over Jerricho Cotchery’s touchdown in last Sunday’s game against the Bengals.

The interview wraps up with a question about the state of the Steelers, and his thoughts on the possibility of playing the Ravens in the playoffs.

If you missed it…


You can watch the video here.